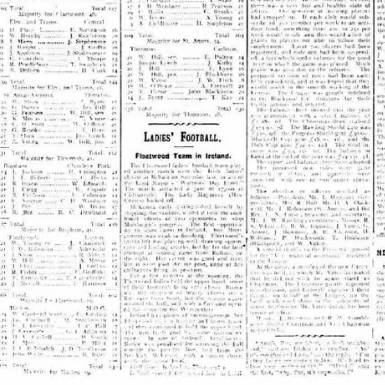 In Belfast, the first women’s football match took place in 1895, and during the first two decades of the twentieth century many further matches were held in aid of local charities. In June 1921, an Irish ladies’ eleven beat Fleetwood ladies’ football team 3-1 in front of 17,00 fans at Cliftonville’s Solitude ground. Later that year a Preston team named Dick Kerr’s Ladies played Belfast Ladies at Windsor Park. In December, the English Football Association (FA) banned women’s games from taking place on pitches owned by FA clubs. Though the ban was not replicated in Northern Ireland, there were fewer games played in rest of the decade.

The Fleetwood ladies’ football team played another match with the Irish ladies’ eleven at Belfast on Saturday last in aid of the Lord Mayor’s “Warriors’ Day Fund.” The match attracted a gate of 17,000 at Cliftonville. The Lady Mayoress (Mrs. Coates) kicked off.

McKenna early distinguished herself by stopping the visitors, whilst it took the combined efforts of two opponents to stop Murdough’s progress. The first opportunity to score came to Ireland, but Montgomery was weak in finishing. Fleetwood’s inside left was playing well, drawing opponents and leading attacks, but by far the best attempt at scoring came from Rollins, on the right. He centre was good and true, but it went past the far post, none of her colleagues being in position.

Ireland had plenty of encouragement, but Fleetwood were a heavier and faster team, and they continued to hold the upper hand. The first Irish goal had some narrow escapes. In one of Ireland’s breakaways Rance as penalised for carrying the ball outside the penalty line, and from the free kick McKenna, with a strong drive made the score level.

Eyes on the Prize

For a few minutes at the opening, the Fleetwood ladies held the upper hand, some of their footwork being very clever. Brown was the recipient of hearty cheers for a fine save from Scott, but the winger again secured the ball, and a fine shot opened the score for the Wyreporters.

Ireland opened the second half in brilliant style, and beautiful cross from the left enabled McKenna to give her side the lead. Another centre from Harland showed possibilities, but the defenders cleared well. The Fleetwood ladies were very aggressive at this stage, and kept the Irish defence busy. The stalwart of the home side was McKenna, whose shooting and break up qualities were quite up to the best. A couple of mistakes by an Irish defender almost brought about defeat. Scott had hard lines in not scoring with a good drive.

The Fleetwood team strove all they were worth to get level, but success attended the Irish representatives. Harland sent across a good centre for McKenna to score again. Fleetwood now fell away, and Ireland, cheered by their supporters, made another raid on the Fleetwood defence, Hall scoring another goal.

Fleetwood appeared to be the better side, and their play in the concluding stages deserved a better fate.