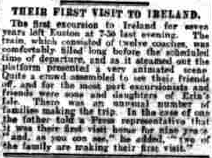 In August 1921, the Belfast Telegraph reported that the first excursion to Ireland for seven years had left London Euston on the previous evening. The popularity of the trip meant that a further excursion was already planned for later that month.

Their First Visit to Ireland

The first excursion to Ireland for seven years left Euston at 19.50 last evening. The train, which consisted of twelve coaches, was comfortably filled long before the scheduled time of departure, and as it steamed out the platform presented a very animated scene. Quite a crowd assembled to see their friends off, and for the most part excursionists and friends were sons and daughters of Erin’s Isle. There was an unusual number of families making the trip. In the case of one the father told a Press representative that it was their first visit home for nine years “and, as you can see,” he added, “two of the family are making their first visit.”