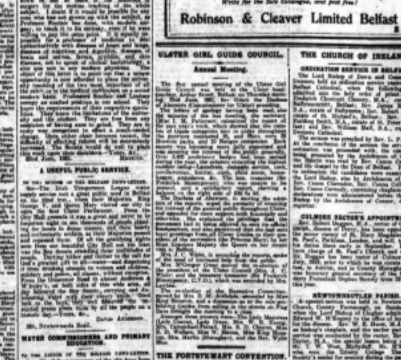 The Girl Guides were officially formed in the United Kingdom in 1910 and the first Irish company was created the following year. In January 1920, a new Ulster Council was formed for the organisation of the Girl Guides in the province. Following the partition of Ireland a separate organisation was founded in the Irish Free State. In June 1921, the Belfast News-Letter reported on the first annual meeting of the Ulster Girl Guide Council, describing the companies in the province and the activities of the organisation.

The first annual meeting of the Ulster Girl Guide Council was held at the Ulster headquarters, Arthur Street, Belfast, on Thursday morning, 23rd June 1921, her Grace the Duchess of Abercorn (Commissioner for Ulster) presiding.

The letters of apology having been read, also the minutes of the last meeting, the secretary (Miss I. H. Patterson) submitted the report of the past year’s work, which showed that that the number of Guide companies now in order throughout the province numbered 95, and there were 22 Brownie packs, and 10 Ranger companies. Each county was becoming more fully organised and was securing the interest of the public generally. Over 3,400 proficiency badges had been earned during the year, the subjects obtaining the highest number being—Laundress, domestic service, cook, needlewoman, knitter, clerk, child nurse, housekeeper, ambulance, &c. The hon. Treasurer (Sir Frederick Moneypenney), who was unable to be present, sent a satisfactory report, showing a balance on the right side of £45 6s 4d.

The Duchess of Abercorn, in moving the adoption of the reports, urged the necessity of retaining the interest of the general public throughout Ulster and appealed for more support both financially and otherwise. She explained the privilege that the movement had in being allowed to own its official headquarters, and also mentioned she had sent loyal greetings from all Ulster Guides to their present of the movement (the Princess Mary) by her Most Gracious Majesty the Queen on her recent visit to Belfast…