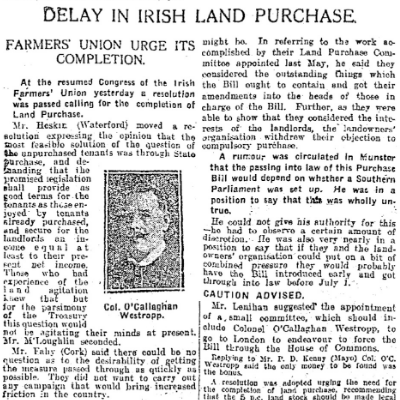 The question of land ownership on the island of Ireland was a recurring source of conflict, culminating in the so-called ‘land wars’ of the late 19th century. Many hoped that independence would bring about wider reforms of land ownership, and that the State would step in to purchase the land on behalf of the people. Yet as this article from the Irish Independent shows, the issue was a source of continual tension.

At the resumed Congress of the Irish Farmers’ Union yesterday a resolution was passed calling for the completion of Land Purchase.

Mr. Heskit (Waterford) moved a resolution expressing the opinion that the most feasible solution of the question of the unpurchased tenants was through State purchase, and demanding that the promised legislation shall provide as good terms for the tenants as those enjoyed by tenants already purchased, and secure for the landlords an income equal at least net income. Those who had experience of the land agitation knew that but for the parsimony of the Treasury this question would not be agitating their minds at present.

Mr. Fahy (Cork) said there should be no question as to the desirability of getting the measure passed through as quickly as possible. They did not want to carry out any campaign that would bring increased friction in the country.

Urgency of the Problem

Colonel O’Callaghan Westropp said the land purchase question ought to be finished and tucked away before trouble should be planted on those who would have the enormous task of founding a new Government in Ireland whatever that Government might be. In referring to the work accomplished by their Land Purchase Committee appointed last May, he said they considered the outstanding things which the Bill ought to contain and got their amendments into the heads of those in charge of the Bill. Further, as they were able to show that they considered the interests of the landlords, the landowners’ organization withdrew their objection to compulsory purchase.

A rumour was circulated in Munster that the passing into law of this Purchase Bill would depend on whether a Southern Parliament was set up. He was in a position to say that this was wholly untrue.

He could not give his authority for this – he had to observe a certain amount of discretion. He was also very nearly in a position to say if they and the landowners’ organization could put a bit of combined pressure they would probably have the Bill introduced early and got through into law before July 1.