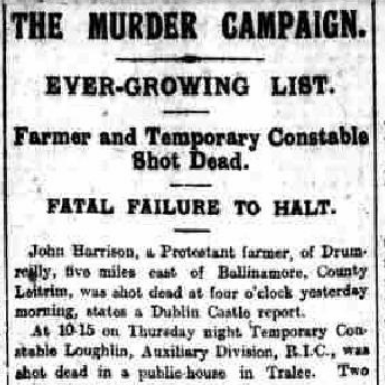 The Auxiliary Division of the Royal Irish Constabulary (RIC) was established in July 1920 to boost Britain’s police presence and to conduct counter-insurgency operations against the IRA during the War of Independence. The Auxiliaries became infamous for propagating reprisals against civilians and civilian property – in turn, they were frequently the target of IRA attacks. A report in the Belfast News-Letter of 23 April 1921 covered the recent shooting of an Auxiliary in Tralee, County Kerry, the latest in what it described as a ‘Murder Campaign’. It also reported the death of a Protestant farmer in Leitrim, and an ex-soldier alleged to be a spy.

At 10:15 on Thursday night Temporary Constable Loughlin, Auxiliary Division, RIC, was shot dead in a public-house in Tralee. Two arrests have been made.

Our Cork correspondent says: Loughlin was employed as a cook in the auxiliary barracks, Denny Street. Deceased was standing inside the counter when about half a dozen revolver shots rang out and he fell mortally wounded. Some friends with him picked him up and the raiders, who had entered by the front door, disappeared. Crown forces were quickly on the scene and made several arrests. …

Afterwards several explosions and shots were heard. Bombs were flung into the houses of ex-Sergeant O’Neill, Church Street, and Mrs Finn, Waterloo Lane. In both cases marvellous escapes of the residents are recorded. In O’Neill’s house a bomb exploded in a room where two men were sleeping. The whole room was wrecked, but the men in bed were not injured. The same applied in the basement-room of Mrs Finn’s, where the mother and daughter were sleeping in different beds. The bomb destroyed everything in the room, but the sleepers miraculously escaped.

A volley of shots rang out in Pembroke Street, and Hurley’s undertaking establishment was entered, the windows and furniture being wrecked.

… In connection with the shooting of John Reilly, an ex-soldier, of Newmarket-on-Fergus, it is officially stated that six armed and masked men gained admittance to his house on the pretence that they were police.

Reilly was shot in the presence of a priest, who had been brought to administer the last rites.

Attached to Riley’s body, which was found lying on a by-road some distance from his house, was the following notice: ‘Spy. Executed by IRA. Getting them at last. Beware.’