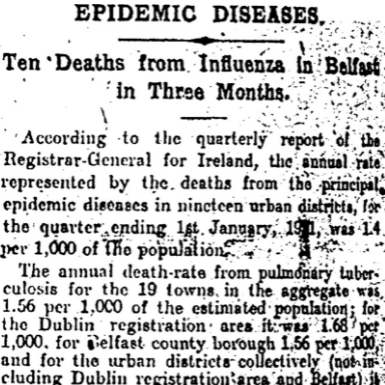 Disease epidemics were rife across the island of Ireland in the early 1920s. In addition to the so-called Spanish Flu pandemic of 1918–20, diseases such as typhus, tuberculosis and  scarlet fever were common, especially in areas with high levels of poverty and poor sanitation. Newspapers such as the Belfast News-Letter carried reports of the latest deaths from disease.

According to the quarterly report of the Registrar General for Ireland, the annual rate represented by the deaths from the principal epidemic diseases in nineteen urban districts, for the quarter ending 1st January 1921 was 14 per 1,000 of population.

The following details of the various epidemic diseases are given in the report:

Of 20 deaths from enteric fever, 4 belonged to Belfast, 12 to Cork, and one each to Dundalk, Newry, Ballymena, and Sligo.

Seven of the 8 deaths from typhus were those of Belfast residents, and one appertained to Londonderry.

Only 3 deaths from measles occurred, 2 belonging to Cork and one to Belfast.

Of 30 deaths from scarlet fever, 18 appertained to Belfast, 5 to Cork, 4 to Londonderry, 2 to Wexford, and one to Lisburn.

There were 12 deaths from whooping-cough, 8 of these having occurred in Belfast, 3 in Waterford, and one in Wexford.

The 67 deaths from diphtheria in the 18 principal towns include 31 for Cork, 19 for Belfast, 7 for Limerick, 4 for Londonderry, 3 for Lisburn, and one each for Galway, Wexford and Kilkenny.

Deaths of children under two years of age from diarrhoea and enteritis, included in this group of diseases, number 87, and of these 50 appertained to Belfast, 16 to Londonderry, 4 each to Waterford and Sligo, and 3 to Limerick.

Of 15 deaths from influenza, 10 were recorded in Belfast.