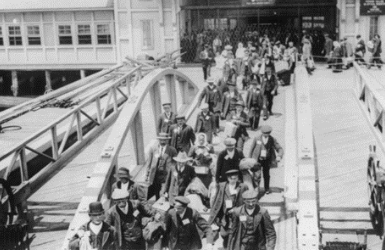 By the start of the 20th century, Irish Americans made up about 13% of the total population of the USA. In addition to the traditional destinations of Boston and New York, migrants from Ireland increasingly sought opportunities further west. Comments published in the Irish Independent from a visitor to Dublin from Omaha, Nebraska, revealed the hostility with which Irish migrants to America were often viewed. The visitor, Jeremiah Howard, urged parents to warn their children against emigrating, suggesting that they would not be able to find work in America and that their long-term opportunities would be improved by remaining in Ireland.

‘If they stayed at home in Ireland and worked for £30 per year on a farm, financially, physically, and morally they would be much better off in the long run than going abroad’, said Mr Jeremiah Howard of Omaha, Nebraska, to a contemporary. Mr. Howard expressed his surprise at seeing large crowds of men and women waiting at the American Consulate, O’Connell St., Dublin to get their passports for America vised. It was bad enough and hard on the men when they got to America, but the plight of the girls was something terrible, and, if parents took his warning, they would keep their children at home.

Mr. Howard said it was a shame to see these people going to swell the unemployed in U.S.A. ‘We have 400,000 demobilised soldiers over there’, he said, ‘waiting for jobs, and what chance have these greenhorns when they land unless they work for nothing, and get half-starved into the bargain?’ By emigration, he added, they were just doing what the English Government wanted them to do – to flood labour markets abroad.

There was a long queue all yesterday at the Consulate. They were mostly young girls, and 2 D.M.P. men were regulating traffic on the footpath.