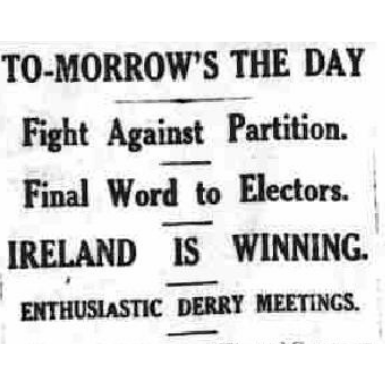 On the eve of elections to the new Northern Ireland parliament, newspapers made last-ditch efforts to encourage votes for their preferred candidates. The selection of editorials below shows the variety of opinions on partition and the formation of Northern Ireland, and how the elections would affect the future of the island of Ireland.

We are now on the eve of the polling day. As Sir James Craig said in South Belfast, “the talk is now done, and the work lies immediately to our hands.” It has been a short but a very strenuous election campaign. We believe that on our side it has been a successful one. That is to say, the Loyalist electors of the Six Counties have been aroused to the momentous nature of the issues which will be decided at the polls to-morrow …

Now, what is the issue of this election for the House of Commons of the new Northern Parliament? One the one side the cause being fought for is the establishment of the new Parliament; on the other side the cause is the destruction of that Parliament. The Party led by Sir James Craig – that is, the Ulster Unionist Party – stands for the establishment of the Parliament; the Party seeking its destruction is the Sinn Fein-Nationalist combination, with a few satellites labelled Independents who are almost exclusively Communists …

Vote for the official Unionist candidates in whatever order he or she prefers, for all of them, and for no others …

For Fair Play and Freedom

Notwithstanding the disgraceful encroachments on electoral liberty made by intimidation, by arrests, by detentions, by suppression of the free speech, and by other forms of terrorism, of which we read as having occurred in Belfast, in Tyrone, and various other localities within the Six County area, a sufficient margin of opportunity remains to voters to declare their minds on the vital issue involved in a momentous contest. Yes; for rendering a service of paramount importance to the fatherland the opportunity will arrive with to-morrow’s dawn. Tuesday, the 24th May, has been fixed for taking a vote of the electors of the Six Counties, around which the British Government – with that utter disregard for, and supreme contempt of, popular wish and requirement which has been always a characteristic interwoven in the fibre of British made legislation in Ireland – are proposing to erect a fence of steel.

… we repeat the counsel given in Friday’s issue to the electors of Derry, Tyrone, Fermanagh, Armagh, Antrim and Down. Every individual who wishes well to his or her country, who desires to free her from the perils of Partition, who seeks to aid her in her struggle towards freedom, peace, and prosperity, should be astir early to-morrow and, in accordance with the De Valera-Devlin compact, register his VOTE FOR THE ANTI-PARTITION CANDIDATES.

To-morrow the electors of the North will cast their voted for or against a divided Ireland. Sir Edward Carson deafened the world for years with rhetoric about a homogenous Ulster. Sir James Crajg has abandoned, or rather has been compelled by the logic of events to abandon, the pretence of a homogenous six counties. In enclaves shamelessly jerrymandered to perpetuate the evil heritage of Orange Ascendancy, the Brethren now confess that every ounce of strength will be needed if they are to secure even a bare majority. Nothing has been left undone by the Government to ensure success for the Partitionists. Though the election is by proportional representation, the constituencies have been parcelled out so as to neutralise the largest number of anti-Partitionist votes …

To-morrow is a day with fate. We are almost at the end of the strenuous contest on which the existence of the six counties as a self-governing community depends. The struggle between the opposing forces is about to be transferred from the platforms to the polling stations, where the issue will be decided. The citizens of Ulster have on many occasions been called upon to make a momentous choice, and never yet have they been untrue to themselves and the principles they profess …

Ulster is in danger now. The danger that threatens her is not obscure. On the contrary, its nature is only too obvious to anyone who reads from day to day the reports we record of what is happening in every part of Ireland where Sinn Fein has obtained a footing. Michael Collins, candidate for Armagh, babbles platitudinous insincerities about “freedom” and “toleration.” But the criminal organisation of which he is the responsible head continues its ghastly work unchecked.

One of the latest feats is the brutal murder of a helpless cripple, who was dragged from the hospital where he had been taken to be healed of wounds inflicted on him by I.R.A. “soldiers,” and done to death in cold blood. That is a specimen of the “toleration” and “freedom” that the Protestants of Ulster would enjoy if Sinn Feiners, with the assistance of so-called “Constitutional” Nationalists, became masters of Ireland. Ulster electors have the power to prevent that disaster to Christianity and civilisation. They must not and will not fail to exercise it.