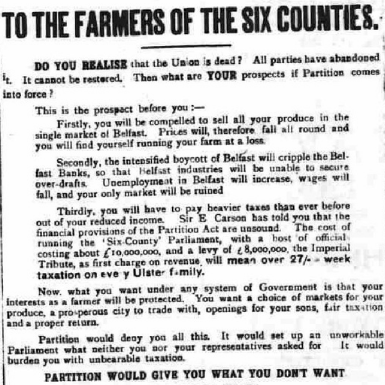 On 20 May, four days before the Northern Ireland general election, the Ballymena Observer printed a message addressed ‘to the farmers of the six counties’. It argued that partition would be detrimental to Ulster farmers, limiting trade, reducing income and increasing taxation. The message finished by imploring farmers to ‘Smash Partition at all costs’.

To the Farmers of the Six Counties

DO YOU REALISE that the Union is dead? All parties have abandoned it. It cannot be restored. Then what are YOUR prospects if Partition comes into force?

This is the prospect before you:

Firstly, you will be compelled to sell all your produce in the single market of Belfast. Prices will, therefore, fall all round and you will find yourself running your farm at a loss.

Secondly, the intensified boycott of Belfast will cripple the Belfast Banks, so that Belfast industries will be unable to secure over-drafts. Unemployment in Belfast will increase, wages will fall, and your only market will be ruined.

Thirdly, you will have to pay heavier taxes than ever before out of your reduced income. Sir E Carson has told you that the financial provisions of the Partition Act are unsound. The cost of running the ‘Six-County’ Parliament, with a host of officials costing about £10,000,000, and a levy of £8,000,000, the Imperial Tribute, as first charge on revenue, will mean over 27/- a week taxation on every Ulster family.

Now, what you want under any system of Government is that your interests as a farmer will be protected. You want a choice of markets for your produce, a prosperous city to trade with, openings for your sons, fair taxations and a proper return.

Partition would deny you all this. It would set up an unworkable Parliament what neither you nor your representatives asked for. It would burden you with unbearable taxation.

PARTITION WOULD GIVE YOU WHAT YOU DON’T WANT.

IT WOULD DENY WHAT YOU DO WANT.

Can a bankrupt Parliament, taxing you beyond your fair taxable capacity just to pay it tribute and maintain its officials, find money to drain the Bann? – to improve technical education? – to advance agriculture? – to improve the transit facilities for your produce, thus making it easier for you to market them?

Remember, the farmers’ representatives will be hopelessly out-voted in a ‘Six-County’ Parliament. Already farmers’ candidates have been turned down by the official clique, which is controlled by the big-flax buying and flax-spinning interests. The job-hunters may do well out of Partition but whoever prospers, the Farmers interests will get the go by.