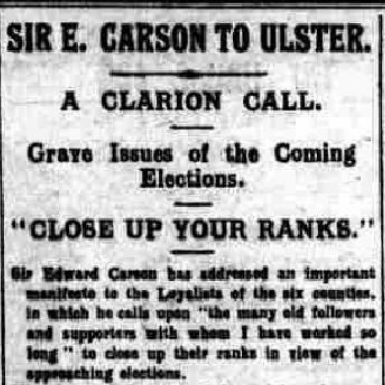 The Government of Ireland Act was officially enacted on 3 May 1921. The act partitioned the island of Ireland into two Home Rule states of 'Northern' and 'Southern' Ireland. The granting of Home Rule status was something that Edward Carson, leader of the Ulster Unionist Party until 1921, had fought against for many years. By the time the act came into force, however, Carson and his Unionist contemporaries had largely, if perhaps begrudgingly, come to accept the eventuality of Home Rule. For Carson, the most urgent task ahead was securing a Unionist majority in the forthcoming elections to the new Northern Ireland parliament; this address from Carson to loyalists, published in the Belfast News-Letter, spelled out what he felt would be the consequences if Unionists did not secure a majority.

Sir E. Carson to Ulster. A Clarion Call. Grave Issues of the Coming Elections. ‘Close Up Your Ranks.’

Sir Edward Carson has addressed an important manifesto to the Loyalists of the six counties, in which he calls upon ‘the many old followers and supporters with whom I have worked so long’ to close up their ranks in view of the approaching elections.

He points out that the rebel campaign of assassination and lawlessness is evidence of what might be expected if by any want of effort a Government should be placed in power in Ulster which was in anywise representative of the tyrannous methods of the Sinn Féin organisation. The tenor of the letter follows:

As the day is now approaching when the Loyalists of the Six Counties will be called upon to elect their representatives, I desire to appeal to the many old followers and supporters, with whom I have worked so long, to close up their ranks, and apply themselves with their characteristic energy and determination to the founding of a Parliament which will be worthy of their community and which will be equal to the great and responsible task of establishing a firm, just, and honest government for the Northern Area.

It is vital to the interests of every inhabitant that the new Government should have the power of pursuing a policy which will promote peace, maintain in its integrity the closest connection with Great Britain and Empire, and Bring about such reforms as will ensure contentment, happiness, and civil and religious liberty to all creeds and classes.

I rely absolutely upon the good sense of our people to allow nothing to interfere with their unity of purpose, which has always in the past enabled us to defeat the efforts of those who desire to weaken the British connection, and to place us under the rule of those who have no sympathy with our ideals and aspirations.

The continued campaign of assassination and lawlessness which is making Ireland a bye-word amongst the nations and ruining her economic position is evidence of what our people may expect if, by any misfortune, or want of effort on our part, a Government should be placed in power in Ulster which was in anywise representative of the tyrannous methods of the Sinn Féin organisation.

Liberty would be at an end, progress would be retarded, and all that we have done to maintain our position would be entirely frustrated.

I need hardly add that, as your old leader, whom you trusted for so many years, I continue to watch with the gravest anxiety the development of the new era in the Northern Area, and I earnestly pray that every man and woman, however humble, will feel that there is now cast upon them a duty and responsibility to see that we preserve from all aggression or infringement those rights and liberties for which we have so long fought and which we are determined to preserve unimpaired.