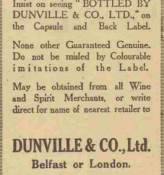 In August 1921, the Sunday Mirror included an advert for Dunville’s VR Whisky asking readers to ‘insist on seeing' “BOTTLED BY DUNVILLE & CO., LTD.,” on the Capsule and Back Label.

None other Guaranteed Genuine

'Do not be misled by Colourable imitations on the Label’. The company was founded in 1808 and Dunville’s was later produced at the Royal Irish Distillery in Belfast, which operated from the 1870s until the 1930s when the Directors liquidated the business.

In 2012, the Echlinville Distillery revived the brand and Dunville’s VR is now distilled on the Ards Peninsula.