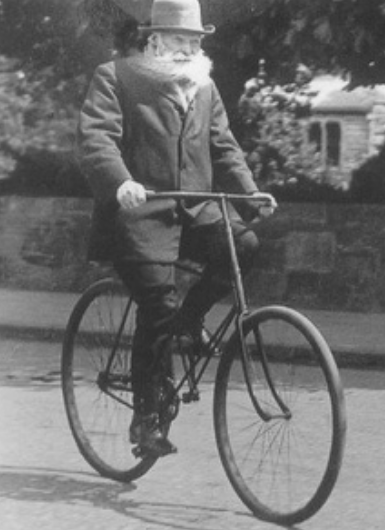 John Boyd Dunlop in about 1915. © Public domain, via Wikimedia Commons.

In 1888, Belfast-based inventor John Boyd Dunlop created the pneumatic tyre, unaware that Robert Thompson had patented a similar design in 1846. Though Dunlop helped found the Dunlop rubber business with Harvey du Cros in 1889, he resigned and sold most of his interests six years later. The following report shows that Dunlop was unhappy with the way that the company subsequently used his image to market its products. Dunlop died at home in Dublin on 23 October 1921.

Dunlop Advertisements. Pictures of Inventor to be Withdrawn from Ireland

A settlement was announced, and was made a rule of Court, in the action brought by Mr. J. B. Dunlop, the inventor of the pneumatic tyre, against the Dunlop Rubber Company, Ltd., in connection with advertisement posters representing Mr. Dunlop in figures and clothing to which he and his friends objected. The company agreed to publish the posters no longer in Ireland, and to pay £330, balance of costs, to Mr. Dunlop’s solicitors.

Mr. Healy, K.C. for the defendants, said they had never admitted that the publications in question were a libel upon plaintiff, but they always felt that, as plaintiff so contended, it was due to him as an old friend of many years’ standing that the company should endeavour as far as possible to obliterate any feeling of friction or dissatisfaction which might have existed because of these publications. Accordingly, when the House of Lords affirmed the decision of Mr. Justice Powell that the publications might possibly have been libellous, the company came to see that it was a proper thing to settle the action. There was no intention on the part of the company to cause Mr. Dunlop, the venerable inventor of the great tyre, the smallest annoyance.

John Boyd Dunlop in about 1915. © Public domain, via Wikimedia Commons.