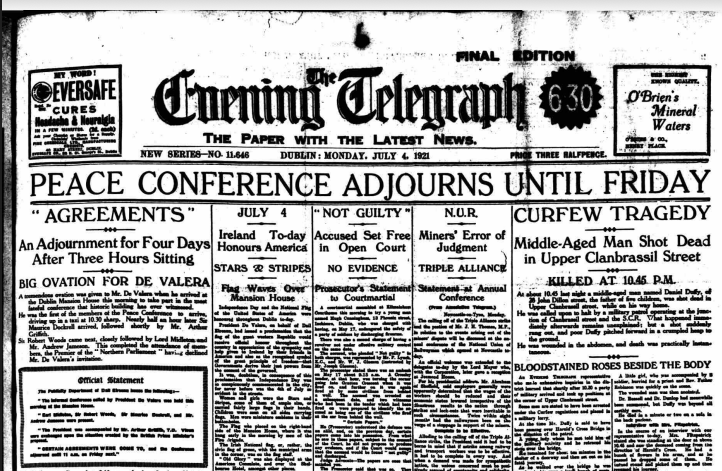 On the same day that Éamon de Valera and Arthur Griffith held a ‘Peace Conference’ with the four Unionist members of the Southern Ireland Parliament, US Independence Day was celebrated across Dublin. The Dublin Evening Telegraph reported that people were wearing or carrying American emblems and the US flag was raised on buildings across the city.

Independence Day and the National Flag of the United States of America were honoured throughout Dublin to-day.

President De Valera, on behalf of Dail Eireann, had issued a proclamation that the flag of the great western Republic would receive official honour throughout the country in appreciation of the sympathy and help given to Ireland by their friends in America and also as the recognised symbol of the great principle of freedom—that Governments derive their just powers from the consent of the governed.

It was, doubtless, in consequence of this proclamation that Independence Day was so conspicuously commemorated in the city, for never before was the 4th of July so evident in the streets.

Women and girls were the Stars and Stripes, some of them of ample size, or carried fairly large flags in their hands. Children were seen on all sides carrying flags. Men wore miniature emblems in their buttonholes.

The Flag was placed on the right-hand side of the Mansion House, where it was hung early in the morning by men of the Fire Brigade.

The Irish National flag, or, rather, the civic flag of green, with the municipal arms in the corner, was on the flag staff.

“Old Glory” was also displayed at the American Consulate, and over the Shelbourne Hotel, amongst other places.

Large numbers in the crowd that assembled outside the Mansion House awaiting the arrival of the distinguished gentlemen to confer on the question of peace either wore or carried the flag.

The crews of all the American ships in port to-day had shore leave and early proceeded to the city.

The vessels were profusely “dressed” with strings of flags and gaily coloured bunting, which gave quite a festive appearance to the port.

The American flag was flown from the Town Halls in Dun Laoghaire, Blackrock, Dalkey and Bray.