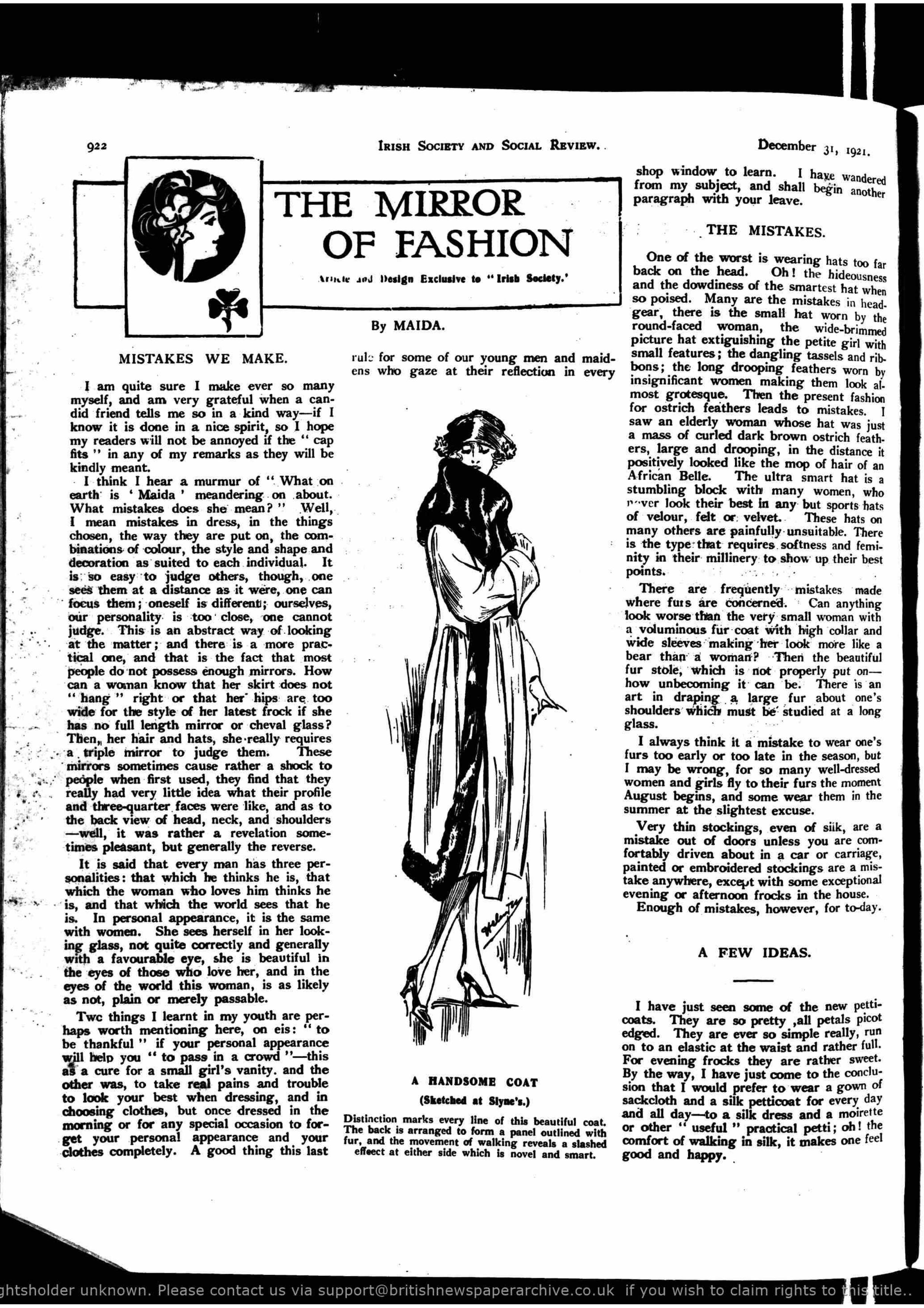 Some historians have argued that magazines encouraged a return to traditional gender roles in the inter-war period. This article from Irish Society and Social Review certainly provides some evidence to reinforce that theory. The article focuses on women’s appearance and the appropriate fashion for various occasions, often with a savage putdown for women who choose to wear the wrong thing. Yet alongside the focus on women’s fashion lies a subtle assertion of women’s agency in terms of their appearance and awareness that vanity could apply to both men and women.

THE MIRROR OF FASHION

I am quite sure I make ever so many myself, and am very grateful when a candid friend tells me so in a kind way – if I know it is done in a nice spirit, so I hope my readers will not be annoyed if the “cap fits” in any of my remarks as they will be kindly meant.

I think I hear a murmer of “What on earth is ‘Maida’ meandering on about. What mistakes does she mean? Well, I mean mistakes in dress, in the things chosen, the way they are put on, the combinations of colour, the style and shape and decoration as suited to each individual. It is so easy to judge others, though, one sees them at a distance as it were, one can focus them; oneself is different; ourselves, our personality is too close, one cannot judge. This is an abstract way of looking at the matter; and there is a more practical one, and that is the fact that most people do not possess enough mirrors. How can a woman know that her skirt does not “hang” right or that her hips are too wide for her latest frock if she has no full length mirror or cheval glass? Then, her hair and hats, she really requires a triple mirror to judge them. These mirrors sometimes cause quite a shock to people when first used, they find that they really had very little idea what their profile and three-quarter faces were like, and as to the back view of head, neck, and shoulders – well, it was rather a revelation sometimes pleasant, but generally the reverse.

It is said that every man has three personalities: that which he thinks he is, that which the woman who loves him thinks he is, and that which the world sees that he is. In personal appearance, it is the same with women. She sees herself in her looking glass, not quite correctly and generally with a favourable eye, she is beautiful in the eyes of those who love her, and in the eyes of the world this woman, is as likely as not, plain or merely passable.

Two things I learnt in my youth are perhaps worth mentioning here, on eis: “to be thankful” if your personal appearance will help you “to pass in a crowd” – this as a cure for a small girl’s vanity. And the other was, to take real pains and trouble to look your best when dressing, and in choosing clothes, but one dressed in the morning or for any special occasion to forget your personal appearance and your clothes completely. A good thing this last rule for some of our young men and maidens who gaze at their reflection in every shop window to learn. I have wondered from my subject, and shall begin another paragraph with your leave.

One of the worse is wearing hats too far back on the head. Oh! The hideousness and the dowdiness of the smartest hat when so poised. There are the mistakes in headgear, there is the small hat worn by the round-faced woman, the wide-brimmed picture hat extinguishing the petite girl with small features; the dangling tassels and ribbons; the long drooping feathers worn by insignificant women making them look almost grotesque. Then the present fashion for ostrich feathers leads to mistakes.

The ultra smart hat is a stumbling block with many women, who never look their best in any but sports hat of velour, felt or velvet. These hats on many others are painfully unsuitable. There is the type that requires softness and feminity in their millinery to show up their best points.

There are frequently mistakes made where furs are concerned. Can anything look worse than the very small woman with a columinous fur coat with high collar and wide sleeves making her look more like a bear than a woman? Then the beautiful fur stole, which is not properly put on – how unbecoming it can be. There is an art in draping a large fur about one’s shoulders which must be studied at a long glass.

Distinction marks every line of the beautiful coat. The back is arranged to form a panel outlined with fur, and the movement of walking reveals a slashed effect at either side which is novel and smart.