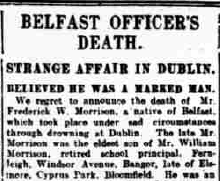 On 11 August, the Belfast Telegraph reported on the tragic death of Frederick W. Morrison, who had taken his own life three days earlier. One witness told an inquest that he saw a one-armed man ‘drop his hat and stick’ before entering the water at the North Wall, Dublin. Morrison refused to grasp the ropes which were thrown to assist him. He was later buried in Bangor’s New Cemetery.

We regret to announce the death of Mr. Frederick W. Morrison, a native of Belfast, which took place under sad circumstances through drowning at Dublin. The late Mr. Morrison was the eldest son of Mr. William Morrison, retired school principal, Fernleigh, Windsor Avenue, Bangor, later Elsinore, Cyprus Park, Bloomfield. He was an old boy of the Royal Academical Institution, and was 24 years of age. His remains arrived in Belfast to-day, and were removed to his parents’ home in Bangor prior to internment in the New Cemetery to-morrow afternoon. The deceased was a fine specimen of manhood, six feet high, and as clever as he was brave. He rendered gallant service in the war and equally gallant service against Sinn Fein in Ireland during his career in the Auxiliary Police. In his eighteenth year, Mr. Morrison was appointed to a commission in the North Staffordshire Regiment, from the service of the Bank of Ireland on Sligo. He was soon transferred to the Machine Gun Corps, and lost his left arm at Messines in 1916. After the war he decided to become a barrister, and went to Dublin to study. The desperate deeds of “Bloody Sunday” in the metropolis made a profound impression on him, because he was acquainted with several of the victims and had been speaking to them the day before they were murdered. He remarked at that time that it would take very little to make him join the Auxiliaries and he did so a short time later.

During the present year he was appointed Intelligence Officer in Dublin—a most hazardous post—and it was finally thought necessary, for his own safety, to transfer him to Co. Roscommon, where he was ambushed several times. After three months’ service he was invalided to Dublin, and on recovery took up duty again in that city. In the course of his duty last May he was examining Sinn Fein letters captured in a raid, and the first one he opened contained the following—“One-armed Morrison back in Dublin. Seen in Grafton Street yesterday at 2-30 p.m.” He did not communicate this to his parents at the time, but he knew he was a marked man. Eventually he retired on completion of his engagement to resume his studies, which he pursued in Bangor in June and July. Last Thursday he returned to Dublin for a final “grind” before the examination for the Bar, and both on Saturday and Monday his parents had cheery letters from him. On Monday evening he met his death, and the circumstances seem inexplicable, because he was in the best of spirits leaving home, and his last letter of Sunday was very bright. He was looking forward eagerly to qualifying for the Bar, and his mysterious death had come as a terrible blow to his friends. The body was identified by deceased’s brother, Mr. Samuel Morrison, late of the Cheshire Regiment, who joined up at the age of 17, and served in France, India, and Mesopotamia. Deceased was a loyal Ulsterman if there ever was one, and his one anxiety when war broke out was to get into the Army at once, so that no man could ever say he was a conscript. The deepest sympathy will be felt for Mr. and Mrs. Morrison and the family circle in their terrible loss.

At the inquest in Dublin on Wednesday a verdict of suicide while temporarily insane was recorded.