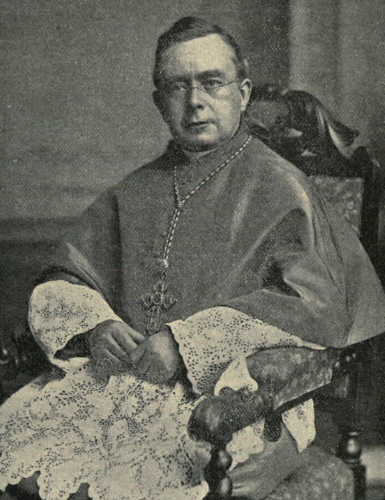 Portrait of Archbishop Walsh in the 1890s. © William Lawrence, via Wikimedia Commons.

The death of William Walsh in April 1921 dealt a blow to the Roman Catholic Community on the island of Ireland. He was a leading advocate for many of the most pressing social, political and economic issues of the day, including education. His open sympathy for both Home Rule and land reform led to him being passed over for the role of cardinal of Ireland. However, as his obituary in the Irish Times shows, he continually advocated for these causes, and was firmly opposed to the partition of Ireland.

We regret to announce that the Most Rev. Dr. William J. Walsh, Roman Catholic Archbishop of Dublin, died in a city nursing home at twenty-three minutes past two o’clock this morning.

By the death of Archbishop Walsh the Roman Catholic Church in Ireland loses one of its most widely renowned members. Born in Dublin on the 30th of January 1841, he received his earlier instruction at the St Lawrence O’Toole’s Seminary, subsequently entering the Catholic University of Ireland … and finally completing his education at Maynooth.

… In 1867, at the age of twenty-six, he was selected to fill the Chair of Dogmatic and Moral Theology, and held that Professorship until 1878, when he became Vice-President of the College … In 1879 Dr. Walsh was appointed a Canon in the Diocesan Chapter of Dublin, and in 1830, upon the death of the venerable President of Maynooth, Dr Russell, the Roman Catholic Hierarchy unanimously chose him to fill the vacant position, the highest and most responsible in the Church outside the Episcopate.

Dr Walsh was already well known as an earnest exponent of advanced opinions upon the Land, University, and other social, economic, and educational questions affecting the welfare of Ireland. Education was the dominating question in which he was absorbed. In his capacity as President of Maynooth College he was necessarily brought into the controversy concerning the famous Leinster Leases, and in his evidence before the Bessborough Commission of 1869–70 he had warmly advocated the cause and claims of the Irish tenantry. Now, in full sympathy with the Parnellite movement, he gave his strong support to the Gladstone Land Bill of 1881, in the framing of which he was said to have exercised considerable influence, and shortly after it was added to the Statute Book he issued his ‘Plain Exposition’ of the Act.

In 1883, when the subject of University education became a leading topic of discussion, he published his work on ‘The Queen’s Colleges and the Royal University of Ireland.’ It was mainly owing to his exertions that a Commission was appointed to inquire into the working of the former. …

Dr MacCabe, Archbishop of Dublin, who had been created a Cardinal by Pope Leo XIII, in 1882, and whose health had never been robust, passed away on February 10, 1885. … In the meantime, the Pope had summoned several of the Irish Bishops to Rome, and the name of Dr Walsh was a little later appended to the list. All doubts were finally set at rest by the announcement on June 23 that Dr Walsh had been selected as Cardinal MacCabe’s successor. ...

… There was no busier worker in his own diocese, no more astute observer of the drift of public affairs.

The Archbishop was a witness before the Parnell Special Commission of 1888–9, and gave evidence which materially helped to further the ends of justice. …

It was, however, in connection with the main problems of Irish education that his energies were most earnestly employed. His ‘Two Addresses on the Irish University Question’ (1890) clearly defined his views, which were further developed in many striking articles appearing in the daily and periodical Press. In 1891 he became a Commissioner of Education in Ireland, and in the year succeeding a member of the Intermediate Education Board. He was appointed a Commissioner of Charitable Donations and Bequests in 1893, and in 1895 a Commissioner of National Education, a position, however, which he resigned in 1901. From 1897 to 1898 he was a valuable member of the Commission on Manual and Practical Instruction in Primary Schools in Ireland.

… His book on ‘Trinity College and the University of Dublin’, published in 1902, gave rise to widespread and occasionally acrimonious discussion, and, in conjunction with his attack on ‘Trinity College and its Medical School,’ which appeared four years later, rightly or wrongly, created the impression that his attitude towards the institution was one of implacable hostility. …

For the past ten years Archbishop Walsh had withdrawn more and more all sympathy from the Redmondite Party. In May, 1917, Cardinal Logue and a majority of the Roman Catholic Bishops signed and published a protest against the partition of Ulster from the rest of Ireland. An election of a member of Parliament was then pending in the South Longford Division. While the contest was raging, Archbishop Walsh wrote a letter explaining why he and the other bishops had signed the protest. ‘Anyone who thinks,’ he wrote, ‘that partition, whether in its naked deformity, or under the transparent mask of co-option, does not hold the leading place in the practical politics of to-day, is simply living in a fool’s paradise.’

In a postscript, he added – ‘I think it a duty to write this, although from information which has just reached me, I am fairly satisfied that the mischief has already been done, and that the country is practically sold.’

This was regarded as the final breach with the Redmondite Party, and the Sinn Fein Party eagerly seized upon a document which they, not unreasonably, believed was a powerful argument in favour of their policy. They had it placarded and circulated all through the division of South Longford, and no doubt it helped their candidate, Mr McGuinness, to win at the poll.

At the General Election in December, 1918, the Archbishop voted for the Sinn Fein candidate in the Clontarf Division, and made no secret of it. …

Portrait of Archbishop Walsh in the 1890s. © William Lawrence, via Wikimedia Commons.