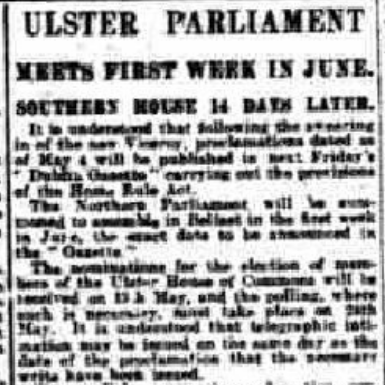 On 3 May 1921 the Government of Ireland Act was formally enacted, partitioning the island of Ireland into two Home Rule states of ‘Northern’ and ‘Southern’ Ireland. On the day that the act came into effect, the newspapers were filled with articles discussing the forthcoming elections to the new Home Rule parliaments. The Belfast Telegraph reported that the elections would be held later in May, with the Northern parliament meeting in early June. It noted that in the case of the ‘Southern’ elections few, if any, seats would be contested – by this point it was widely acknowledged that Nationalists would win a majority in the Southern elections, which they viewed as a contest not for a Home Rule parliament, but for the second Dáil Éireann.

It is understood that following the swearing in of the new Viceroy, proclamations dated as of May 6 will be published in next Friday’s ‘Dublin Gazette’ carrying out the provisions of the Home Rule Act.

The Northern Parliament will be expected to assemble in Belfast in the first week in June, the exact date to be announced in the ‘Gazette’.

The nominations for the election of members of the Ulster House of Commons will be received on 13th May, and the polling, where such is necessary, must take place on 24th May. It is understood that telegraphic confirmation may be issued on the same day as the date of the proclamation that the necessary writs have been issued.

There will be a separate proclamation announcing the Southern Parliament to sit in Dublin fourteen days after the assembling of the Northern Parliament.

It is expected that the election proceedings for the Southern Parliament will end with the nominations on 13th May, as in the great majority of cases there will be no contest.