On 29 May, the Sunday Independent published three cartoons commenting on recent events in Ireland. The first concerned Frank Percy Crozier, who served as commander of the Auxiliary Division of the Royal Irish Constabulary from July 1920 to February 1921, and had recently published a dossier based on his experience serving in Ireland. The cartoon suggested that this evidence might suffer a similar fate to the Strickland Report into the burning of Cork, which was never officially published by the British Government.

The second cartoon satirised Edward Carson’s recent appointment to the House of Lords, focusing on his age and perceived vanity.

Most controversially, the final cartoon suggested that anti-partitionist voters were prevented from voting at the recent Northern Ireland election, at which the Unionists won 40 of the 52 available seats. 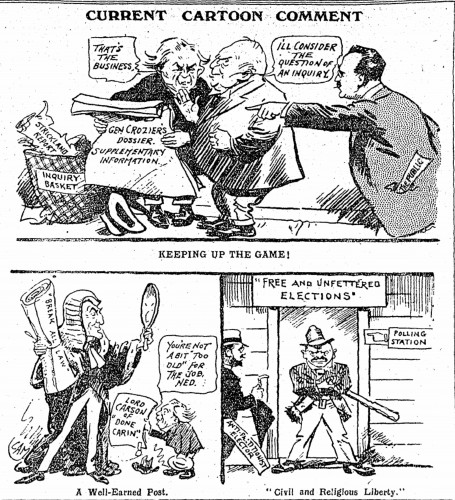