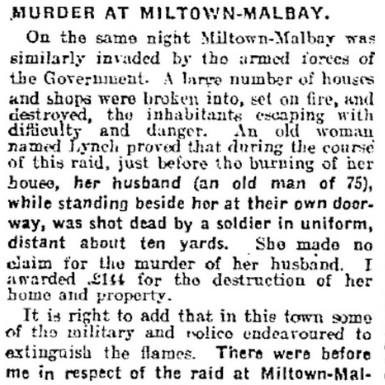 In 1921 the judge Matthias McDonnell Bodkin published his Judicial Report on The Devastation of County Clare. This was a detailed account of abuses carried out by Black and Tan forces during the War of Independence. As a county court judge, Bodkin awarded compensation to the victims of these attacks, and argued that all compensation should be paid by the British government for what Bodkin saw as unlawful reprisals. Newspapers across Ireland and Britain printed extracts of Bodkin’s Report, which attracted significant attention. This extract, published in the Irish Independent, highlighted the atrocities carried out by Black and Tans after an IRA ambush at Rineen in September 1920.

Violence by Forces of the Crown

Judge Bodkin says that it was proved before him that criminal injuries were done by Crown forces in 139 cases and the compensation awarded was £187,046.

This, he describes, as an impossible burden for the ratepayers, and he expresses the opinion that it should be paid by the Treasury.

He adds that in none of the cases was there any evidence that the victims had been guilty of any offences, and in a large number of cases women and children were treated with great violence.

It was proved that on the night of Sept. 22 the town of Lahinch was attacked by a large body of the armed forces of the Government. Rifle shots were fired apparently at random in the streets and a very large number of houses and shops were broken into, set on fire, and their content looted and destroyed. The inhabitants, most of them were women, and children, and invalids, old people over 80, and children in arms – were compelled at a moment’s notice and at peril of their lives to fly through back doors and windows to the sandhills in the neighbourhood of the town, where they remained during the night, returning in the morning to find their houses completely destroyed. In the course of the attack a man named Joseph Sammon was shot dead.

On the same night Miltown-Malbray was similarly invaded by the armed forces of the Government. A large number of houses and shops were broken into, set on fire, and destroyed, the inhabitants escaping with difficulty and danger. An old woman named Lynch proved that during the course of this raid, just before the burning of her house, her husband (an old man of 75), while standing beside her at their own doorway, was shot dead by a soldier in uniform, distant about ten yards. ...

In the Nature of Reprisals

In four other cases, after proof of the burning of houses, hay, and other property by the Government forces, military officers attended in Court, and proved that the houses etc had been burned by the military, in two of the cases by the express direction of the officer in command, and in the other two by the verbal authority of the competent military authority.

There was no evidence or suggestion that any of the occupants of the houses or the owners of the property had been guilty of any offence. … I found on the facts that the burnings were in the nature of reprisals, and I decided that ‘the ordinary avocations of life and the enjoyment of property had been interfered with’ and that these burnings were not necessary or at all calculated to secure the maintenance or restoration of law in Ireland.

… In no case was there any evidence to suggest that the victims had been guilty of any offence.

…. The compensation already awarded in this county in criminal injury claims amounts, I am informed, to well over a quarter of a million. This constitutes in my humble judgment an impossible burden on the ratepayers of the county, many of them already hopelessly impoverished by the loss of their property and means of livelihood, and I would strongly recommend that in the cases in which it is clearly proved that the criminal injuries were committed by the armed forces of the Government the compensation should be paid out of the public Treasury.