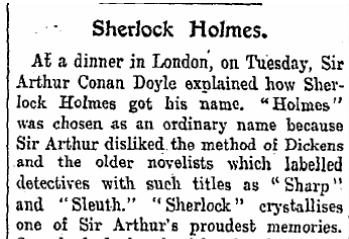 Arthur Conan Doyle’s Sherlock Holmes books were not sleeper hits. First appearing in A Study in Scarlet in 1887, Conan Doyle’s iconic detective enjoyed massive popularity from the early 1890s onwards. The Irish Times dedicated part of its 29 September editorial to discuss the author’s thoughts on his most famous creation, whose popularity was soaring thanks to a series of Sherlock Holmes films. The Irish Times also offered a playful critique on Conan Doyle’s carefree attitude towards Holmes’ wellbeing.

At a dinner in London, on Tuesday, Sir Arthur Conan Doyle explained how Sherlock Holmes got his name. “Holmes” was chosen as an ordinary name because Sir Arthur disliked the method of Dickens and the older novelists which labelled detectives with such titles as “Sharp” and “Sleuth.” “Sherlock” crystallises one of Sir Arthur’s proudest memories. Once he had played cricket for the United Services against the M.C.C. and had made twenty or thirty runs off the bowling of Attewell and Sherlock. It seems to have been just luck that the great detective did not win his triumphs under the name of Attewell Holmes. Sir Arthur Conan Doyle does not stand on punctilio with his characters. 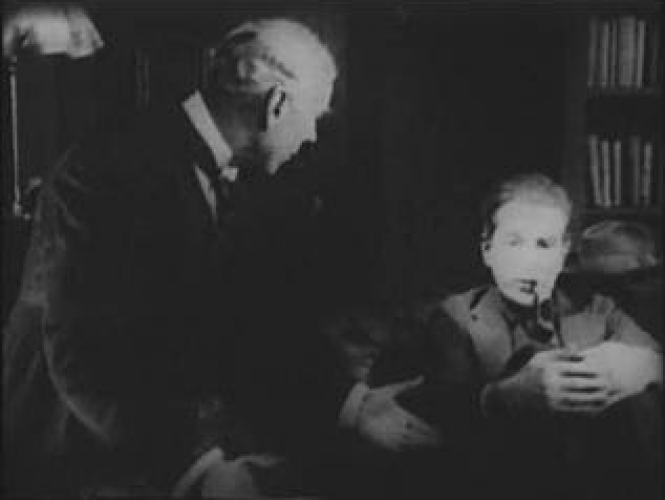 We all know how he restored Sherlock Holmes to life when the public demanded a further batch of mysteries. He tells us now that, when Mr. William Gillette, the actor, asked his permission to “marry Holmes” for the purpose of a play, his answer was: “You may marry or murder him or do anything you like with him.” Such treatment of a very eminent person who is now receiving a new lease of life and popularity in the “pictures,” and to whom Sir Arthur owes much, seems to us to be disrespectful, if not actually heartless. It would have shocked the faithful Dr. Watson beyond words.