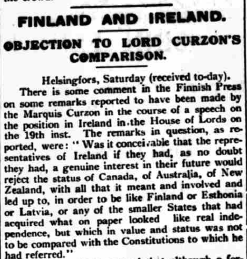 In August 1921, the press in Helsinki responded to comments made by Lord Curzon in which he equated the constitutional status of Finland to Estonia and Latvia.

There is some comment in the Finnish Press on some remarks reported to have been made by the Marquis Curzon in the course of a speech on the position in Ireland in the House of Lords on the 19th inst. The remarks in question, as reported, were: “Was it conceivable that the representatives of Ireland if they had, as no doubt they had, a genuine interest in their future would reject the status of Canada, of Australia, of New Zealand, with all that it meant and involved and led up to, in order to be like Finland or Esthonia or Latvia, or any of the smaller states that had acquired what on paper looked like real independence, but which in value and status was not to be compared with the Constitutions to which he had referred.”

The papers here contend that although a formal recognition of a new State, or even its membership of the League of Nations, do not mean much in the eyes of the Great Powers of the world, the Foreign Minister of the mighty British Empire should not forget that Finland, by virtue of her independent, cultural, political, and economic development over centuries, holds a position quite different from that of the so-called Russian border States.

One organ says: “The world is governed by realities and not by documents, and owing to this fact we Finns dare to take a more optimistic view of our future than those who do not know that our position  is founded on realities which are not to be found in the development of the Russian border States.”—Reuter.