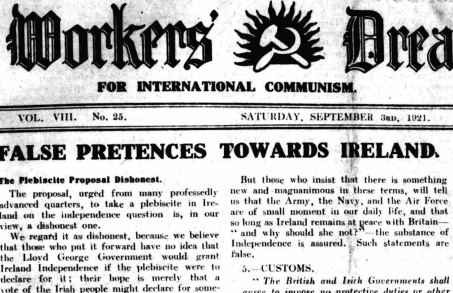 The Workers’ Dreadnought, founded by Sylvia Pankhurst in 1914, was the weekly newspaper of the Communist Party (British Section of the Third International). In September 1921, the front cover featured the paper’s view on Ireland’s relationship with Britain and David Lloyd George’s offer of Dominion Home Rule. It detailed seven conditions which it believed were inconsistent with the British Government’s offer: naval defence, the army, air service, recruiting and financial burden of army and navy, customs, Ireland’s share of the war debt, and Ulster.

The proposal, urged from many professedly advanced quarters, to take a plebiscite in Ireland on the independence question is, in our view, a dishonest one.

We regard it as dishonest, because we believe that those who put it forward have no idea that the Lloyd George Government would grant Ireland Independence if the plebiscite were to declare for it; their hope is merely that a vote of the Irish people might declare for something less.

We believe, too, that the plebiscite proposal is put forward as a means of evading the responsibility of standing for or against the direct issue of Independence.

Mr. Arthur Henderson, generally recognised as the leader of the Labour Party, has said it is disappointing that the Lloyd George terms have not been accepted by Sinn Féin; but, that if the British Government’s offer means Dominion Home Rule, this should be stated in clear language.

Mr. Henderson, of course, knows too much about Dominion Home Rule to be under the illusion that the form of Home Rule at present offered to Ireland can be so described…

To Communists, the question of Ireland’s independence is only important because the workers in an independent Ireland would be more free to learn that their real enemy is Capitalism, and because the break-up of the British Empire means the destruction of a great bulwark of the capitalist system.