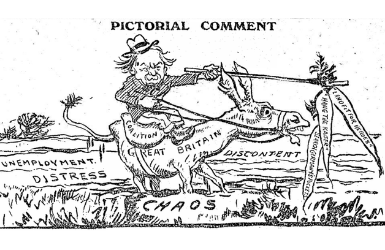 The ‘coal crisis’ of 1921 was sparked by the decision of British Prime Minister, David Lloyd George, to privatise Britain’s coal mines. The mines had been temporarily nationalised during the First World War, but now they reverted to private hands. This article from the Sunday Independent records the dispute between the mine owners, who argued that private ownership would be more economical for the industry, and the miners themselves, who refused to accept the lower wages that would come with privatisation. The mining unions called for a strike, hoping for support from the union leaders in the rail and transport industries. However, on 15 April 1921 these unions announced that they would not call for a strike in support of the miners. This decision became known as ‘Black Friday’, and was regarded by many labour radicals as a betrayal of the miners and a breach of working-class solidarity.

No Prospects of a Settlement of the Dispute

Cabinet Ministers view the coal crisis as the most serious chapter in the history of England since the declaration of war in 1914.

Approximately 1,200,000 mines are idle, and thousands of workers in other trades have been thrown out of employment as a result.

The ‘safety men’ in most cases, on the instructions of their Executive, have left their posts, and already six mines are reported to have been flooded, in some cases beyond repair.

Volunteers are at work at the pumps in some collieries and the Government is considering the question of drafting naval ratings to the pits.

The threat of direct action by the railway and transport workers is a very real danger, and the probability of a lighting sympathetic strike by these Federations is by no means remote.

Sir Robert Horne … declared that the situation created by the stoppage of the mines is one of infinite anxiety. Are miners entitled to stop the coal pits because the Government will not grant a subsidy or because owners will not agree to a public arrangement? An equal justification could be put forward for the subsidising of many other trades, but it is only necessary to remember that subsidies can only be paid out of moneys collected by taxation, and such taxation is levied upon all the industries in the country. Either, then all industries would be subsidised – in which case we should rather live by taking in each other’s washing – or, only coal being subsidised, in which case we should be attempting to extract from other industries money which they cannot afford to pay in order to pay uneconomic wages in the industry which is better off on the matters of employment than almost any other. …

Mr. Frank Hodges, secretary of the Miners’ Federation, issued a statement on coal crisis in which he said the new district wage proposals put forward by the coal owners considered in relation to the present cost of living meant a smaller real wage for the miner than he received before the war. ‘The miners,’ he said, ‘are entitled to public sympathy in their resistance to such hardships as the present proposals would create. The nation will surely not require cheap coal at the cost of the men who produce it under conditions of great physical strain.

‘The coalowners’ proposals not only involve a drastic reduction in wages, but a calculable lowering of standard of life.

‘If wages were brought into strict relation to the present cost of living on the basis of the average pre-war wag in the coalfields, they would be considerably higher than the new rates proposed by the owners.’

The issues in the dispute are:

Payment of wages on a district basis reverting to rates current before the war with additional percentages according to the ability of districts to pay them.

A standard wage throughout the country and at a national pool of profits to help the poorer districts. …