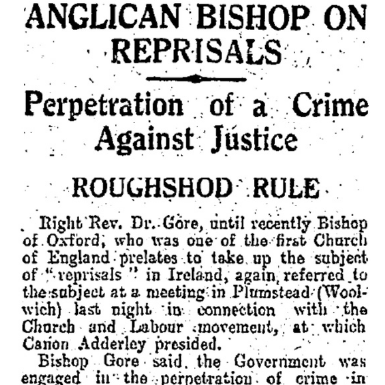 The winter of 1920–21 witnessed some of the bloodiest events of the War of Independence. In response to IRA attacks, Crown forces enacted violent reprisals, often involving attacks on civilians. Such reprisals were extremely controversial, and condemned not only in Ireland but in Britain. This extract from the Freeman’s Journal records an emotive speech by the Anglican bishop and prominent social reformer Charles Gore condemning the British government’s policy of reprisals as an injustice that must stop immediately.

Anglican Bishop on Reprisals: Perpetuation of a Crime Against Justice. Roughshod Rule

Right Rev. Dr. Gore, until recently Bishop of Oxford, who was one of the first Church of England prelates to take up the subject of ‘reprisals’ in Ireland, again referred to the subject at a meeting in Plumstead (Woolwich) last night … Bishop Gore said the Government was engaged in the perpetration of crime in Ireland against justice and the foundation of civil liberty and order.

must not be allowed to go on any longer. The Government must be made to understand that England still, in some senses, stands for liberty and justice. No sane man can fail to see that our treatment of Ireland through the centuries has been characterised by oppression, injustice, and a profound lack of sympathy.

The great mass of the Irish people believed themselves to be fighting for liberty against an alien Power. He deplored that, but that was what they felt, and with a great deal of justice. He was not there to defend the outrages of which the Sinn Féin Government and fighting force had been guilty, but it was very easy to condemn them as an Englishman speaking on that side of the channel.

When he first heard of reprisals he disbelieved it. He could not believe that in order to suppress rebellion a civilised Government would allow the merging of the guilty and the innocent and the execution of indiscriminate vengeance on whole districts and the whole country. Cork was deliberately burnt down, and the same sort of remorseless and indiscriminate destruction practised there had been committed on a smaller scale in hundreds of other places.

As Englishmen he wanted them to take a great oath – that they would not allow military forces to right roughshod over civil authority and liberty. 'Are we a democracy?' asked the Bishop:

‘With the development of military science, popular risings are perfectly hopeless and cannot be effective. One thing only is a security for our liberties – that the army shall be kept strictly subject to civil authority and Parliament. What are we to say to our American friends? If we have any regard for our traditions and our reputation in other countries we must put an end to reprisals in Ireland’.

'There must no longer', he added, 'be power in the hands of the military to execute a man for no other reason than his possession of a revolver'.