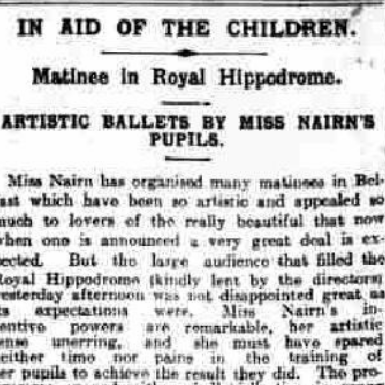 In April 1921 the Belfast News-Letter reported on a charity matinee held at the Royal Hippodrome. The event featured several dance performances and proceeds were given to the Belfast Branch of the National Society for the Prevention of Cruelty to Children, which had been established in the late 19th century. The Royal Hippodrome, located next to the Grand Opera House on Great Victoria Street, was one of the city’s foremost variety theatres, providing accessible and affordable entertainment for Belfast citizens.

In aid of the Children. Matinee in Royal Hipprodrome. Artistic Ballets by Miss Nairn’s Pupils.

Miss Nairn has organised many matinees in Belfast which have been so artistic and appealed so much to lovers of the really beautiful that now when one is announced a very great deal is expected. But the large audience that filled the Royal Hippodrome (kindly lent by the directors) yesterday afternoon was not disappointed great as its expectations were. Miss Nairn’s inventive powers are remarkable, her artistic sense unerring, and she must have spared neither time nor pains in the training of her pupils to achieve the result they did.

The programme opened with a ballet d’action in sunny Italy. The title was indeed no misnomer, for the scene at once suggested light, movement, gaiety, and atmosphere. The curtain rose on an Italian market square, where an old grandmother and her crony keep stalls, and the various episodes which occurred delighted the audience and held the attention rivetted …

The programme concluded with a ballet pantomime from the Russian fairy tale “The Princess who would not smile.” The theme is familiar to everyone, and no better story could have been chosen to contrast two types of Russian music and dancing …

During an interval the Lady Mayoress of Belfast (Mrs. W. F. Coates) kindly drew the winning numbers for the ballot in connection with the numbered programmes. The two generous prizes were generously given by Lady McDowell and Mrs. Herbert Brown.