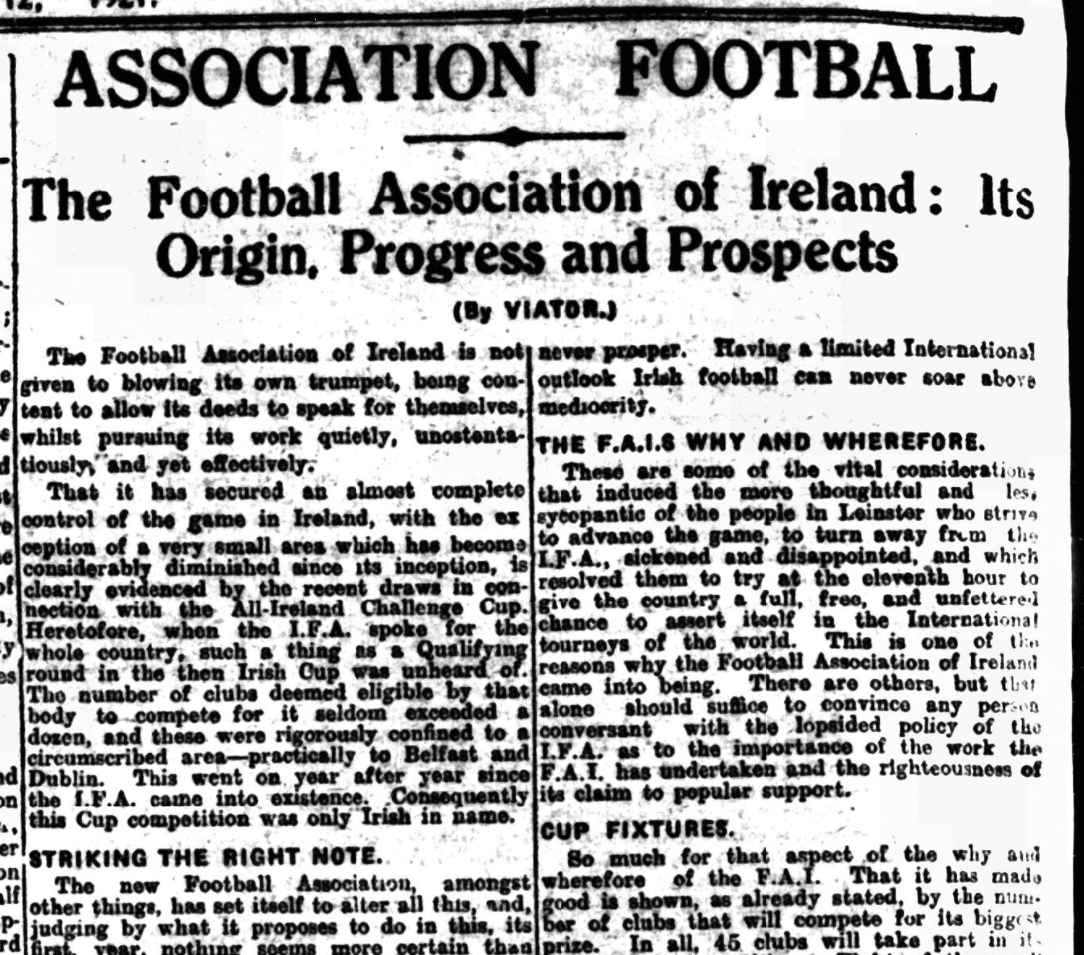 Sport has always been difficult to separate from politics. As the troubles of the early 1920s developed, tensions increased between many soccer teams in what was to become the Irish Free State and the Belfast-based Irish Football Association (IFA). The IFA was accused of preferring Ulster teams, and matters came to a head when Shelbourne FC (Dublin) refused to compete for the IFA cup in Belfast in 1921 due to the rates of political violence in the city. At a fateful meeting in Dublin's Molesworth Hall in June between many representatives of Irish football teams outside of Ulster, the decision was made to establish the Football Association of Ireland (FAI). This organisation continues to organise football in the Republic of Ireland to this day. This piece of commentary from the Dublin edition of the Sport reviews the new organisation's success in its early months. 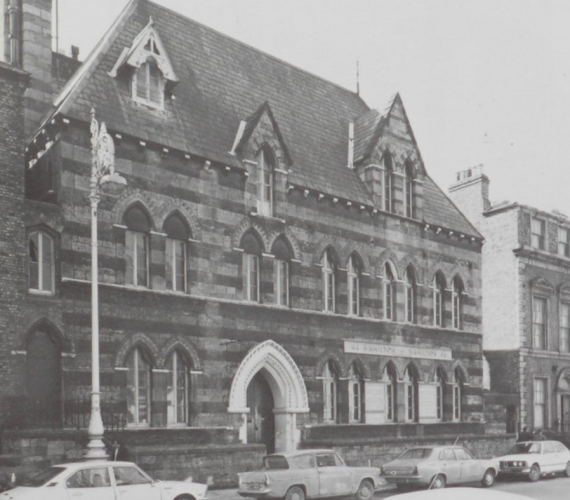 The Football Association of Ireland: Its Origin, Progress and Prospects

The Football Association of Ireland is not given to blowing its own trumpet, being content to allow its deeds to speak for themselves, whilst pursuing its work quietly, unostentatiously, and yet effectively.

That it has secured an almost complete control of the game in Ireland, with the exception of a very small area which has become considerably diminished since its inception, is clearly evidenced by the recent draws in connection with the All-Ireland Challenge Cup. Heretofore, when the I.F.A. spoke for the whole country, such a thing as a Qualifying round in the then Irish Cup was unheard of. The number clubs deemed eligible by that body to compete for it seldom exceeded a dozen, and these were rigorously confined to a circumscribed area – practically to Belfast and Dublin. This went on year after year since the I.F.A. came into existence. Consequently this Cup competition was only Irish in name.

The new Football Association, amongst other things, has set itself to alter all this, and, judging by what it proposes to do in this, its first, year, nothing seems more certain than that it has struck the right note. This note has found an echo in parts of Ireland which have continued to ignore the existence of the I.F.A. as they always did, and which would in all probability have remained outside the game had not the F.A.I. provided them with a cause and a programme which appealed not only to their nationality as Irishmen, but to their instincts of sportsmanship as sportsmen. They felt that here was a body which proposes to do for Ireland internationally what should have been done thirty years ago, and realising that it is better late than never in this matter, at all events, they responded.

It has not been a big response. But it is tangible, it is real, and its possibilities of development are limitless. Circumstances innumerable, delicate and powerful, have contributed to the dimensions of the support. These circumstances will alter. Many of them will in the course of time absolutely disappear. Probably before next season the raison d'etre will have been removed, when, in the greater and wider freedom, the growth and strength of the F.A.I. is inevitable.

Towns such as Tipperary, Longford, Athlone, Clara, Mullingar and Moate, leaving out of consideration the large slice of Belfast that has proclaimed its allegiance to the new Association, may not in themselves strike the average mind as being of much significance. But they represent a beginning, a tangible beginning, and no person can truthfully say that even a small beginning by earnest men is not better than no beginning at all. Almost everything in this country is many years behind the times, football included. And the responsibility for the decay or the neglect is practically identical in its motive whether one contemplates our backward industries or our backwardness in Soccer football. The wrong people, people who were always out of sympathy with the aspirations of the bulk of their countrymen, arrogated to themselves the right to control football. Had they controlled it on proper lines they might have made it a success, and few would have questioned their authority. The people in Leinster particularly have looked on grumblingly for years at the narrow system of procedure that obtained, hoping against hope that some day some effort would be made to place the government of the game on such as basis as would enlist co-operation, as would broaden its influence, as would extend its ramifications, but the seasons came and went and instead of growth a shrinkage set in that threatened general destruction.

Periodically, in the past clubs sprang up here and there in Leinster and Connaught and Munster, but with the exception of Dublin their lives were of short duration. The parental body presented its cold shoulder to them. It cast them a few doles occasionally and left them to fend for themselves. Needless to say they soon perished. This has gone on for over twenty years.

Nothing mattered to the governing body so long as big gates were garnered from Internationals at Belfast. The remainder of Ireland, so far as they were concerned might look out for itself. Eventually Soccer football in this country reached such a low ebb that the teams selected to represent Ireland perforce of the paucity capable players with Irish clubs, had to be found by appeals to English and Scottish clubs to permit Irishmen assisting them in cross-Channel football to turn out for the Irish side.

THE FARCE OF IT.

In other words, the time came when the Irish teams were to play England and Scotland and Wales were trained by English, Scottish and Welsh clubs. In effect the English, Scottish and Welsh clubs put two teams on a Belfast field every year to play each other for the purpose of raising funds for the I.F.A. and to gull the public called it an International match. If the I.F.A. went out of existence to-morrow and the F.A.I. ceased to function the same farce could go on while football continues to give employment to a few Irishmen with cross-Channel clubs. Assuming that happened, of what use would it be to Irish football? Having no International outlook Irish football can never prosper. Having a limited International outlook Irish football can never soar above mediocrity.

THE F.A.I.S. WHY AND WHEREFORE.

These are some of the vital considerations that induced the more thoughtful and less sycophantic of the people in Leinster who strive to advance the game, to turn away from the I.F.A., sickened and disappointed, and which resolved them to try at the eleventh hour to give the country a full, free, and unfettered chance to assert itself in the International tourneys of the world. This is one of the reasons why the Football Association of Ireland came into being. There are others, but that alone should suffice to convince any person conversant with the lopsided policy of the I.F.A. as to the importance of the work the F.A.I. has undertaken and the righteousness of its claim to popular support.