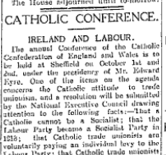 The relationship between organised labour and the Catholic Church was not harmonious in early 20th century Britain and Ireland. The Catholic Church had condemned the workers of the 1913 Dublin lock-out, and Jim Larkin in particular, as socialist revolutionaries. By 1921 the Catholic Church’s position had not changed much. This Cork Examiner (now Irish Examiner) article reported on the agenda being set for the annual Conference of the Catholic Confederation of England and Wales, where Catholics were discouraged from paying their dues to trade unions if they were affiliated with the “Socialist International”. The article also highlighted the Confederation’s denial that any future Irish state would be “governed and guided” by the Catholic Church.

A further resolution of the Executive suggests the advisability of Catholic co-operators opposing every attempt to connect the co-operative movement in any way with the Labour Party.

The annual report of the Executive states that a resolution had been adopted on the motion of the Salford Confederation on the subject of Ireland in the following terms:- “This meeting of Catholics calls the attention of his Majesty’s Government and of the British public to Sir Edward Carson’s Belfast statement that their brave volunteers would never submit to the yoke of a Dublin Parliament, government and guided by the Hierarchy of the Church of Rome, and that this meeting emphatically repudiates the idea that a Dublin Parliament would be so governed and guided.