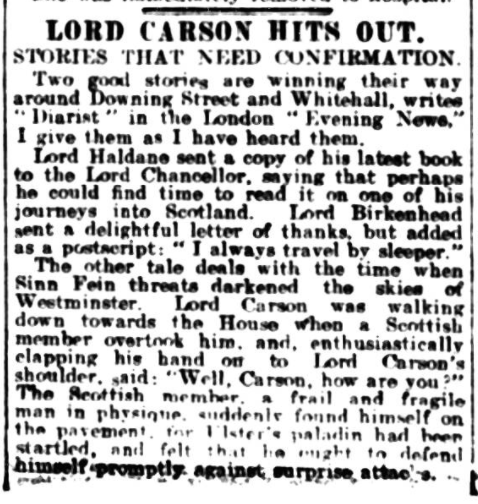 The Belfast Weekly Telegraph, sister paper to the moderate unionist Belfast Telegraph, was not above repeating the gossip they read in their competitors. Two decent rumours were doing the rounds in London that weekend. The first involved a cheeky snub from the Chancellor of the Exchequer over a colleague’s probably dull book. But the second was quite scandalous – the suggestion that Edward Carson, chief representative of unionism in the early 20th century, had struck and knocked over a “frail” fellow MP when he startled Carson on the street. 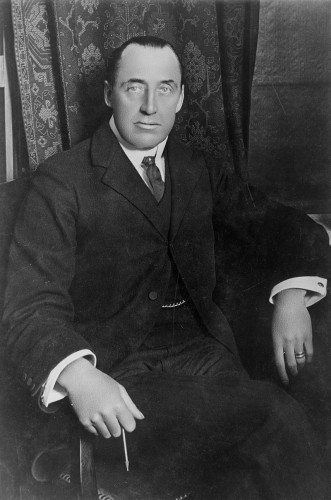 Two good stories are winning their way around Downing Street and Whitehall, writes “Diarist” in the London “Evening News.” I give them as I have heard them.

Lord Haldane sent a copy of his latest book to the Lord Chancellor, saying that perhaps he could find time to read it on one of his journeys into Scotland. Lord Birkenhead sent a delightful letter of thanks, but added as a postscript: “I always travel by sleeper.”

The other tale deals with a time when Sinn Fein threats darkened the skies of Westminster. Lord Carson was walking down towards the House when a Scottish member overtook him, and, enthusiastically clapping his hand on to Lord Carson’s shoulder, said: “Well, Carson, how are you?” The Scottish member, a frail and fragile man in physique, suddenly found himself on the pavement, for Ulster’s paladin had been startled, and felt that he ought to defend himself promptly against surprise attacks.