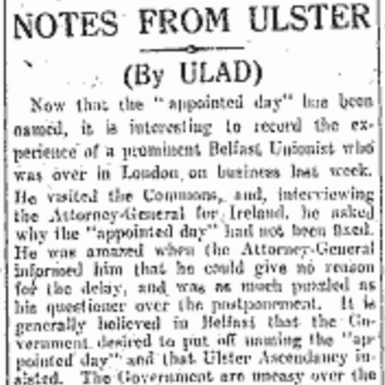 The Government of Ireland Act of 1920 partitioned Ireland, creating two new Home Rule states of ‘Northern’ and ‘Southern’ Ireland. In April 1921, a month before the elections to the new Home Rule parliaments, the Freeman’s Journal gave its opinion on the parties, Unionist and Nationalist, standing for the Northern parliament.

… It is generally believed in Belfast that the Government desired to put off naming the ‘appointed day’ and Ulster Ascendancy insisted. The Government are uneasy over the fact that the Southern Parliament won’t function, and there will be consequently no Council of Ireland.

It must be admitted that, in the selection of official candidates, extremists have not, up to the present, been chosen. Mr J.M. Barbour, D.K. Lisburn, head of the celebrated thread manufacturing firm of Messrs Barbour and Company, is one of the candidates selected for South Antrim. He is very popular with all creeds, and is of moderate views. In his remarks accepting nomination, Mr Barbour said he was ‘an Irishman proud of his country, and full of love for it, and his one desire was to see her peaceful, prosperous, and contented’.

In this connection, it may be said that the desire seems to be for businessmen as candidates, and some of the Orange extremists are not finding a warm acceptance even in Belfast. …

Labour is playing a waiting game. The pogroms of last year aroused sectarian passions, and Independent labour was literally down and out. This was the object Ascendancy had in starting the religious disturbances; as the rank and file always refuse to listen to democratic appeals when stirred by skilful attacks on ‘Rome.’ Time and again in Belfast democratic labour leaders have been headway, only to be submerged by the roll of the Orange drums.

It is noteworthy that the members of Sir E Carson’s Unionist Labour Association, who in July and August last attended the shipyards and addressed meetings of the men, arousing sectarian bitterness and starting the pogroms, are now the candidates selected to bear the labour banners and rally under the leadership of Sir James Craig. … Independent Labour, in the meantime is holding up, and its prospects are somewhat more promising. If no Nationalists and few Independents stand, Labour will, it is believed, try its chance in Belfast and in some of the Six Counties.

Labour will be disappointed, so far as the Nationalists are concerned. The report, published recently in the Freeman, is strictly correct, and there is practically a complete solidarity, in the Nationalist ranks – Sinn Féin and Constitutional. Every seat will be contested and the full popular strength polled. The policy will be one of abstention, or rather a complete ignoring of what is a mere caricature of a Parliament.

The Constitutional Nationalists recognise that they could not expect to return more than from 5 to 7 members (the Sinn Féiners are expected to return 9 or 10), and that such a small number would be hopelessly impotent in face of an Orange Opposition. …

Mr H.W. Pollock is looked upon as the new Chancellor of the Exchequer in the Northern Parliament. Speaking at a Unionist meeting in Cromac Ward, Belfast, he made some remarkable admissions. He said:

‘There could be no question that for many years the Province of Ulster had not received the attention from the Imperial Parliament that it required. They were so far from the centre of things at Westminster and they were regarded as such a negligible quantity that many questions of reform had been passed over, and a good deal of leeway had to be made up.’

Could a Nationalist make a more pronounced Home Rule speech? And yet this gentleman fought tooth and nail against the miserable modicum of legislative liberty that is being given to Ireland – including Ulster.

Mr Pollock furthermore practically admits that the Northern Parliament will not be in a sound financial position, but he said ‘they had an implied guarantee from the Government that they would have sufficient funds to carry out some of the ideals of the people in respect of the development of the resources of the six counties.’ This is practically an admission that the Northern Parliament will be bankrupt so far as development of resources of the six counties is concerned.