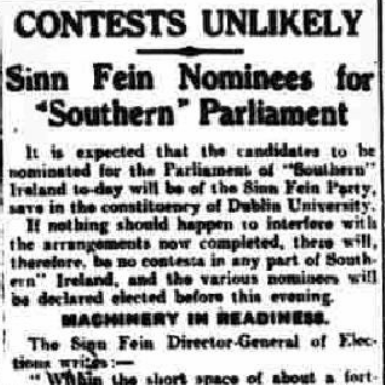 On 13 May 1921, the Freeman’s Journal reported that it expected all candidates for the Parliament of ‘Southern Ireland’ to be elected unopposed. It included a list of Sinn Féin candidates, stating at least 25 of whom were still in jail. Sinn Féin refused to recognise the parliament and viewed the elections as a contest for the second Dáil Éireann. All 124 Sinn Féin candidates were returned unopposed and the remaining four seats comprising Dublin University were taken by Unionist candidates.

It is expected that the candidates to be nominated for the Parliament of “Southern” Ireland to-day will be of the Sinn Fein Party, save in the constituency of Dublin University.

If nothing should happen to interfere with the arrangements now completed, there will therefore, be no contests in any part of “Southern” Ireland, and the various nominees will declared elected before this evening.

Within the short space of about a fortnight the Sinn Fein organisation, although supposed to have been suppressed, has been able to have candidates selected all over what is called in the Partition Act ‘Southern Ireland.’

Activities in the North-East started earlier. All arrangements have been made to meet contests wherever necessary.

For the 145 candidates put forward under the Republican banner the aggregate sum of £21,750 has to be lodged with the nominations, and in every area, except one or two in the North-East, this sum has been provided locally.

No contest is expected in ‘Southern Ireland.’ But should such take place the machinery is in full working order.

Inquiries yesterday elicited the information that there was no likelihood, as far as could be seen, that any Unionist or Conservative candidates would be put forward anywhere in Southern Ireland, with the exception of the University of Dublin.

It was stated that the Chief Secretary, Sir Hamar Greenwood, had a conference at Dublin Castle yesterday with several gentlemen from the North of Ireland, and that the conference lasted from 11 o’clock till a quarter past four. It was not possible to verify the statement, or to ascertain whether, if the conference did take place, it was concerned with the elections …