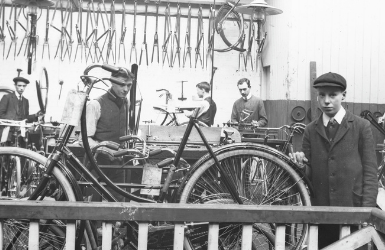 Boys working in the Lucania bicycle works, Dublin, in about 1910. © National Library of Ireland.

The exploitation of children and teenagers in factories and other industrial settings remained widespread well into the 20th century. Reforming groups such as the Committee on Wage-Earning Children campaigned for changes in the law to prohibit children from working until they reached a certain age. This letter, published in The Times in March 1921, shows the continued efforts by the Committee to prevent child labour exploitation, by calling the government to raise the school leaving age in Britain, and requesting funds from the general public to help in its campaign. Laws preventing children under 14 from working were not passed in Britain until 1933. In Ireland, 14 was the official school leaving age from 1926, though child labour, especially in agriculture, continued to be a common practice.

Sir, After 20 years of unceasing work the Committee on Wage-Earning Children has recently passed another landmark.

Its first triumph was the Employment of Children Act of 1903, which definitely prohibited street-trading up to 11 years of age and authorized by local authorities to prohibit or regulate all employment of children for profit up to 14. Since then the Committee has made many successful efforts to induce local authorities to create such regulations, but its work in this direction is by no means fully accomplished.

The second triumph has been the general acknowledgement by the 1918 Education Act of the need for control of child-life up to 16, and the freeing of the child, in accordance with the edict of the International Labour Bureau, from all labour for profit up to 12 years of age and from all industrial work up to 14.

Much Yet Remains to be Done

After every such success a section of supporters tends to exclaim, ‘The work is finished; our help is needed no longer’. But much yet remains to be done. … In recent consideration of the child, the present nominal school-leaving age of 14 is tending to be ignored, and this is well; but from the Committee’s point of view, the age between 12 and 16, perhaps the most critical, during which citizens or hooligans are made, remains a problem.

An extension of the powers of local authorities to make by-laws in regard to employment up to 16 or even 18 is urgent. Our Bill for this purpose is already before the Parliament, but it is not likely to pass unless we can secure a strong backing. It is further important to bring into existence a universal school attendance up to 14, and an effective continuation school attendance up to 16 or 18.

For all this work money is urgently needed. Up to the present time the Committee’s modest income of from £50 to £60 a year has sufficed for our necessities. Such a sum would still be enough if it could be obtained, but our subscription list has unfortunately dwindled during the war years and is now only about half its normal size; many of our subscribers have suffered through the war taxation, a few have died, and new ones could not so far be found. The financial position of the Committee has, therefore, become serious, and we appeal earnestly to the public not to let the efficiency of the work be impaired for lack of funds.

Boys working in the Lucania bicycle works, Dublin, in about 1910. © National Library of Ireland.