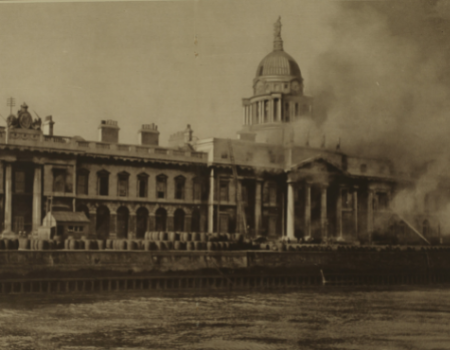 Photograph in the Illustrated London News of the Custom House fire.

On 26 May, the front cover of the Dublin Evening Telegraph featured the first results from the elections to the Northern parliament. This coverage, however, was eclipsed by news that on 25 May the IRA had occupied and later set fire to Dublin’s Custom House as part of the War of Independence. The Custom House was a powerful symbol of the British administration in Ireland, and drew international attention. Nine people were killed in the attack. The following report is a ‘girl typist’s vivid story’ of the previous day’s events.

…”At five to one,” she said, “I came back from luncheon. Coming in, I saw a young fellow walk up to the policeman standing at the gate at the Beresford place side. I walked in believing there was just one of the usual raids for papers, and when I met some of the girls I told them not to go down, as there was a hold-up outside.

“On the stairs I met porters and clerks coming down, but they hurried back, too, when they saw the men in the hall.

“I went up to my room and left in my hat and parcels—the room is at the very top of the building. Then I came out on the passage and looked over the banisters. After that I went into another room, and was speaking there with a goal, who has been help up downstairs and escaped, when another girl came in and said that we were all to clear out as soon as possible.

“I returned to my room. It was saturated with petrol. A raider apologised profusely for any damage done to a lady’s room, and told me to take coats and things, ‘as they might be useful.’

“So we went downstairs, loaded with clothing and various belongings, and in the hall found the whole staff and the Controller proceeding upstairs. Another girl and I made the best of our way through the crowd to the Beresford place exit.

“At the door were seven young men, writing in books, and we met other men carrying cans of petrol. They refused to let us out, so we passed along the back corridor through the Custom House paper supply stores towards the gate opening out of the Basin.

“The raiders marshalled us up there; and so we remained for about two minutes. There were 4 of the Custom House luncheon staff and 4 lady clerks, and a large number of men clerks. The latter were forbidden to smoke, and the raiders ranged up bicycles belonging to the staff near by, ready to hand out when we were leaving, and got ready to open the gate.

At a signalling whistle other raiders came through the Custom House windows to assist, but the gate was found locked. There was talk of bursting it open with revolvers, but they refrained, seemingly not wishing.

A Tremendous Volley from Outside

“Then those at the gate shouted to the staff, ‘Back, back!’ and there came a tremendous volley from outside the gate.

“Proceeding to protect the ladies first, were put around the corner, out of direct range, into the glass paper store-house.

“There was a few seconds wild shouting, and people rushed in and said to all to lie down.

“We were lying on the floor, sometimes on one another.

“Many got hysterical; one girl was flinging her arms about calling for her mother.

“Men were appealing to the Auxiliaries firing outside, ‘friends, friends.’

“All the time the raiders were cool and exceedingly polite, and only for the arrival of the Crown forces, there would not have been one casualty.

“After the volley, there were shouts of ‘up and out.’ All had to put their arms over their heads.

“Now we saw Auxiliaries in the Custom House windows, and during the confusion the gate had been opened.

“Mr. McKenzie, a member of the staff, was badly wounded and moaning.

“The arm of a boy of 16 or 17 was battered, and another man (who has since died) was bleeding fearfully from the chest.

“We were brought out across towards the draw bridge, but to our amazement it was up, and we could not pass over.

“The Auxiliaries were by the rails. There were no doctors or priests, and few bandages and any aid rendered by some young men, apparently raiders.

“Now flames appeared in two centre windows on top of the building.

“After a while one Auxiliary got over the railings, and five civilians carried out and laid outside what appeared to be an old man covered with blood.

“After this the men walked across the further end of the basin towards the Beresford Place end, where military were at the gate, but the Auxiliaries shouted to them to come back.

“Then the Auxiliaries began to climb over the railings, and when they were inside there was another volley. Auxiliaries shouted orders to those inside the building to secure the arm of the dying man, the man who, so far as we could see, was bleeding so profusely from the chest, and they threw in bandages.

“At the time he seemed quite unconscious and as one on the verge of death.

“Now the windless men arrived, accompanied by a man with a policeman’s peacked cap, and proceeded to lower the drawbridge.

“Word was sent down that the ambulance had arrived. The wounded men were removed, and we were also told to go— ‘ladies first.’

“When we got outside the gate and walked up the quay, Auxiliaires and others were about.

“There were some ships up at the Custom House side of the river loaded with porter barrels.

“Auxiliaries were getting on to these vessels and some already on them crouched down behind the barrels and taking aim towards the opposite side of the river, though I did not see them actually firing.

“An armoured car was standing at the end under the bridge, and give young men were standing with hands up by the gate leading to the yard of the Custom House.

“Outside Brooks’ Thomas’s a civilian crowd was lying on the ground.

“At most there were from 40 to 50 raiders in the Custom House; there was a tremendous number of Auxiliaries and military. The military were prominent in front of Liberty Hall and Beresford Place and the Auxiliaries at the back of the building.

“And that is all I actually saw. We went away among the rest of the people after that”.

Photograph in the Illustrated London News of the Custom House fire.