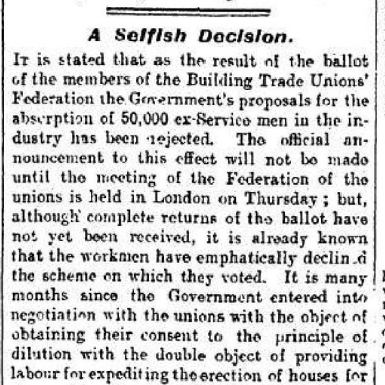 Former soldiers struggled to find paid employment across Great Britain and Ireland after the end of the First World War. The Belfast News-Letter and other newspapers condemned trade unions and individual workers for not doing more to help ex-servicemen find paid employment. This article criticised trade unions for their ‘selfish’ attitude, and suggested the government should directly employ ex-servicemen in trade and industry.

It is stated that as a result of the ballot of the members of the Building Trade Unions’ Federation the Government’s proposals for the absorption of 50,000 ex-Service men in the industry has been rejected.

The official announcement to this effect will not be made until the meeting of the Federation of the unions is held in London on Thursday; but, although complete returns of the ballot have not been received, it is already known that the workmen have emphatically declined the scheme on which they voted.

It is many months since the Government entered into negotiation with the unions with the object of obtaining their consent to the principle of dilution with the double object to providing labour for expediting erection of houses for the working classes under various State-aided schemes promoted by local authorities throughout the country, and finding suitable employment for demobilized Service men. From the first difficulties were experienced in settling conditions of dilution which the unions would accept. They insisted for a long time on the Government giving guarantees to all operatives in the industry against occasional and seasonal employment for a term of years, and for the maintenance of standard wages. …

But if union leaders do not agree to dilution in aid of the ex-Service men on the terms offered and to the extent now required, there will be no alternative to the Government proceeding with direct employment of the ex-Service men. The country will not suffer the building trade unions’ denial of right to the ex-Service men of entry into trades which they are physically able to work. Such a policy of exclusion is altogether selfish.