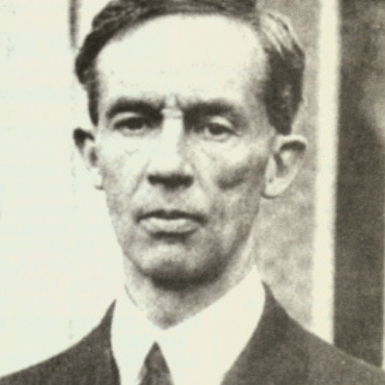 Erskine Childers, editor of the 'Irish Bulletin'. © via Wikimedia Commons.

The Irish Bulletin was a republican newspaper, produced secretly in Dublin by Dáil Éireann from 1919 until July 1921. The Bulletin was an attempt to get around the strict censorship of Irish news by the British authorities; edited by Erskine Childers, it circulated information about the situation in Ireland to foreign correspondents, including weekly lists of atrocities committed by Crown forces.

In March 1921 the Bulletin’s offices were raided by British authorities, who seized the typewriters and used them to produce a counterfeit edition of the Bulletin, which went out on 1 April 1921. However, the edition was immediately recognised to be a fake. The incident caused further embarrassment for the British government when the counterfeit edition was raised in questions at Westminster. As reported in the Irish Independent, the Attorney General for Ireland and MP for South Londonderry, Denis Henry, was forced to deny that the fake Bulletin was produced using government money. The debacle was the latest in a series of missteps on the British side to win the ‘propaganda war’ within the War of Independence.

Replying to questions by Mr Cairns and Major Barnes with reference to the issue of alleged forgeries of the ‘Irish Bulletin’, Mr Henry said the Chief Secretary had no knowledge whatever of the authorship or source of issue of the publication, and he was in no better position than other hon. members to express an opinion as to whether it was what it purported to be, a genuine ‘Irish Bulletin’. Judging, however, from internal evidence of style, and subject matter, and bearing in mind the date of its issue, he was inclined to accept what appeared to be the general conclusion in regard to its authenticity.

The suggestion that the Irish Government was in any way responsible for the document, or that a single penny of the Irish vote had been expended on its production, was, of course, untrue. There could be no doubt that a recent issue, beginning on April 1, was a hoax.

Lieut.-Commander KENWORTHY asked: How does the right hon. Gentleman think it possible for these forged "Bulletins" to come to private persons who have been receiving the genuine bulletins in the past unless they came from the Crown forces who seized the list of addresses, and will the right hon. Gentleman make further inquiry as to how this can be published and circulated without any expenditure of public money?

Mr. HENRY: A great many things are circulated without any expenditure of public money.

Lieut.-Commander KENWORTHY: Is the right hon. Gentleman aware that forged copies are coming out, each invariably bearing a twopenny stamp, to the list of, I believe, about 500 people who received the old "Bulletins," and how can that be done without an expenditure of public money?

Mr. HENRY: It may be that the money is expended by benevolent politicians.

Major BARNES: Will the Attorney-General assure the House that the same efforts will be made to trace the forged ‘Bulletins,’ and stop their circulation, as were made to stop the genuine ‘Bulletins’?

Erskine Childers, editor of the 'Irish Bulletin'. © via Wikimedia Commons.