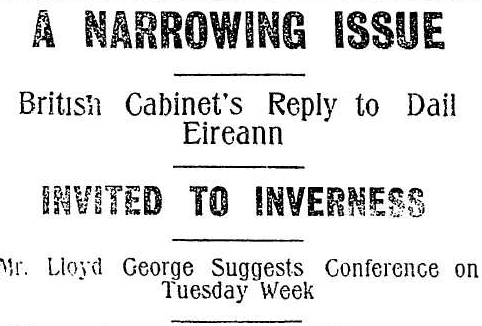 After several months of discussion, and a fortnight before a resolution to the Irish question is due, Lloyd George responds to the Dáil's rejection of Dominion Status suggesting attendance at a Scottish conference.

To all intents and purposes the issue between Dail Éireann and the British Cabinet, has been knit, and within the next fortnight a definite outcome of the recent correspondence between Mr. de Valera and Mr Lloyd George is bound to result.

The centre of interest has shifted from the Scottish highlands to Dublin and there was a renewal of public interest in the Mansion House, which had been on the wane during the proceedings at Inverness. Large crowds of spectators watched the arrival of the Irish leaders. It is expected that a meeting of the Dáil cabinet will be held this evening.

Speculation is rife as to what will be the reply to the British Premier's invitation. While the general belief is that the conference will take place it cannot be counted on with certainty.

Viscount FitzAlan arrived at Dun Laoghaire this morning on a destroyer from Scotland, and motored to Dublin.

General Sir Nevil Macready also arrived by a destroyer and proceeded to Dublin. He returned subsequently to Dun Laoghaire and went to Holyhead en route to London.