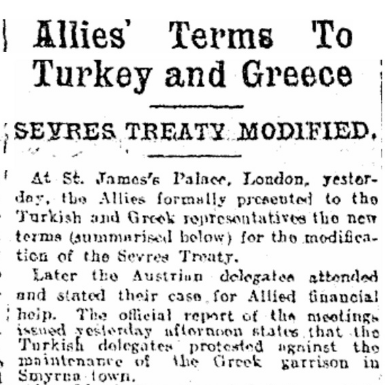 1919 saw the outbreak not only of the War of Independence in Ireland, but also of the Greco-Turkish War, which lasted until 1922. The conflict was centred on the partitioning of the Ottoman Empire in the aftermath of the First World War, which gave rise to a Turkish nationalist movement. British Prime Minister David Lloyd George had promised Greece territorial gains, which were set out in the 1920 Treaty of Sèvres. The treaty was modified in 1921, promising Turkish admission to the League of Nations, limited Allied military occupation, and allowing for freedom of movement between Turkey and the rest of Europe. Yet the treaty was never ratified by the Ottoman Empire.

At St James’s Palace, London, yesterday, the Allies formally presented to the Turkish and Greek representatives the new terms for the modification of the Sèvres Treaty. … The official report of the meeting issued yesterday afternoon states that the Turkish delegates protested against the maintenance of the Greek garrison in Smyrna town.

Mr Lloyd George reminded them, it is added, that the original proposal for a Commission of Inquiry into Eastern Thrace and Smyrna had been rejected by the Greek delegations. They had also only a conditional acceptance by the Turks.

Turkey and League of Nations

The following is a summary of the new Near East terms as officially announced yesterday afternoon:

Allies to facilitate the admission of Turkey to the League of Nations on condition that Turkey gives proof of readiness to execute the Treaty as now modified. Withdrawal of the menace of the expulsion of Turkey from Constantinople in certain contingencies. …

Rapid evacuation of Constantinople and the Izmit Peninsula, and limiting of Allied occupation of Gallipoli and Chanak.

Maintenance by Turkey of troops in Constantinople. Admission of Turkish right of free passage between Asia and Europe. Turkey to be given more satisfaction in the matter of the strength of her naval forces. Substantial financial concessions.

Financial Commission to be placed under the honorary presidency of the Turkish Finance Minister and Turkey to have a vote on all questions affecting her internal finances. …

The Treaty to be modified in regard to Kurdistan on condition that facilities are granted for the local autonomy and adequate protection of Kurdish and Assyrio-Chaldean interests.