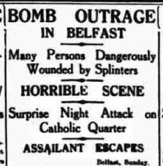 On 22 August, the Freeman’s Journal reported on a bomb explosion in a largely Catholic area of north Belfast. This incident was followed by a renewed outbreak of gun activity when Loyalist gunmen opened fire upon the Catholic district of North Queen Street. A bomb was also thrown in this area, but fortunately did not explode.

A terrible bombing outrage was perpetrated in Tyrone street shortly before 10 p.m. to-night, resulting, it is feared, in fatal injuries to a young girl named Sarah Flanigan (20), and the maiming of six other persons, one of whom is a young girl.

Tyrone street is situated close to Carlisle Circus, and is mainly occupied by Catholic residents. It is close to the border line of an Orange locality. All was quiet there during the day.

Shortly before ten p.m., when the street was crowded with children playing, a stone was thrown, and this was followed by a bomb. A terrific explosion ensued, after which the agonising cries of the injured children could be heard. The girl, Flanigan, was standing at the door of her home, and received a large splinter in the chest. She was removed to hospital, and is not expected to recover, the wound being in the vicinity of the heart.

The explosion shattered the windows in adjacent houses, and blew out the frames and sashes.

The report was heard on Castlereagh Hills, some six miles away.

When the police arrived on the scene the adjacent street was cleared.

Young Burton is the son of a loyalist, two of whom reside in Tyrone street.

The explosion created intense excitement, and large crowds hurried from all parts to investigate the occurrence.

Watson, whose daughter is also injured, was standing at the door with his children when the bomb exploded.

The assailant appears to have escaped unobserved.