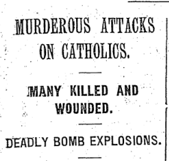 The violence in Belfast continued in late September, as reported in this Ulster Herald edition from 1 October. Despite the violence, the Ulster Herald still included light entertainment and items of interest. On the same page were some words of wisdom for the people of Omagh to live their lives by.

Many killed and wounded.

Blood flowed freely in Belfast during the week-end, when the campaign of the pogromists became more intense in its ferocity. The determined attack on Catholic workers during the week developed with savage intensity on Saturday and Sunday with resultant loss of life and a formidable list of wounded. Five men were killed during the week-end – the first victim being Henry M’Stoker (21), a blacksmith, of Moira Street, who was shot on Saturday evening after leaving St. Matthew’s Catholic Church, Ballymacarrett, where he had been at Confession.

FOR HOURS THE TERRIFIED OCCUPANTS OF HOUSES IN THE SIDE STREETS COWERED TOGETHER UNDER TABLES AND CHAIRS.

The general terror caused by the rattle of rifle fire was further augmented by the frequent crash of breaking glass as bullets swept through the front windows and lodged in the walls opposite. M’Stocker was killed about this time. He had left St. Matthew’s Church, where he had been at Confession. He walked alone along the street, about two hundred yards from the church, and near Young’s row he was met by a hostile crowd. A revolver shot was fired, and the unfortunate man collapsed. He endeavoured to crawl along the ground in an attempt to draw himself into a place of safety. The mob, however, with hoarse shouts, advanced towards him, when a Catholic woman, despite the threatening demeanour of the oncomers, rushed to the side of the stricken man, and, placing her arm under his head, shouted loudly for help. Her plucky action had the effect of holding back the Orange mob. Several other Catholics came on the scene, and a glass of water was placed to the lips of the patient. In a few moments Father Davey, C.C., St. Matthew’s, rushed to the place and administered spiritual aid to the dying man, and the ambulance arrived shortly afterwards. As it drove away in the direction of the Mater Hospital, the mob jeered and hoohed. The patient died before reaching the hospital.

Time is gold; throw not one minute away, but place each one to account.

The hand should not be too ready to grasp the sword. – St. Francis of Assisi.

A broken promise is like a broken dish – you may repair it, but never trust it as when whole.

Watch, disciple of life! Watch and labour towards the development of the angel within thee!

Prudence is that virtue by which we discern what is proper to be done, under the various circumstances of time and place.”