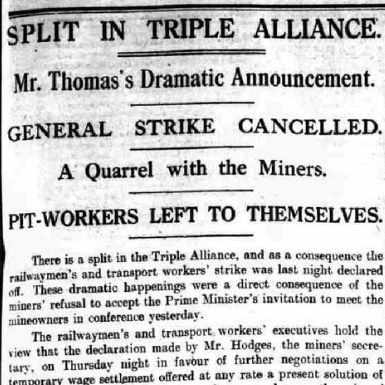 15 April 1921 is remembered in British labour history as ‘Black Friday’, when the leaders of the transport and rail unions announced a decision not to call for strike action in support of the miners, who were faced with wage reductions after the industry was de-controlled on 31 March. Labour radicals believed that the decision amounted to a breach of solidarity and a betrayal of the miners. As reported in the Belfast News-Letter the following day, it also split the so-called ‘Triple Alliance’ that had been formed between the rail, transport, and miners’ unions in 1914.

There is a split in the Triple Alliance, and as a consequence the railwaymen’s and transport workers’ strike was last night declared off. These dramatic happenings were a direct consequence of the miner’s refusal to accept the Prime Minister’s invitation to meet the mineowners in conference yesterday.

The railwaymen’s and transport workers’ executives hold the view that the declaration made by Mr Hodges, the miners’ secretary, on Thursday night in favour of further negotiations on a temporary wage settlement offered at any rate a present solution of the problem. This view they yesterday pressed upon the miners’ executive, but without avail, and the order for a general strike was accordingly cancelled.

Thus the miners are left to fight their battle themselves. The new position will be further considered by their executive to-day, when a date will be fixed for a national delegate conference to determine upon the course to be followed in the new circumstances.