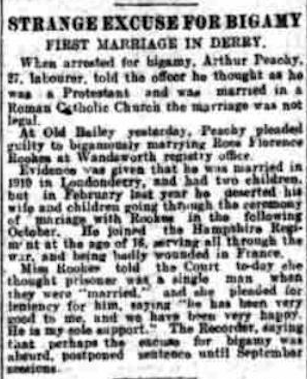 On 19 July 1921, the Belfast Telegraph reported on the unusual case of Arthur Peachy, originally from Derry, who pleaded guilty to a case of bigamy at London’s Old Bailey court.

When arrested for bigamy, Arthur Peachy, 27, labourer, told the officer he thought as he was a Protestant and was married in a Roman Catholic Church the marriage was not legal.

Evidence was given that he was married in 1910 in Londonderry, and had two children, but in February last year he deserted his wife and children going through the ceremony of marriage with Rookes in the following October. He joined the Hampshire Regiment at the age of 16, serving all through the war, and being badly wounded in France.

Miss Rookes told the Court to-day she thought prisoner was a single man when they were “married,” and she pleaded for leniency for him, saying “he has been very good to me, and we have been very happy. He is my sole support.” The Recorder, saying that perhaps the excuse for bigamy was absurd, postponed sentence until September sessions.