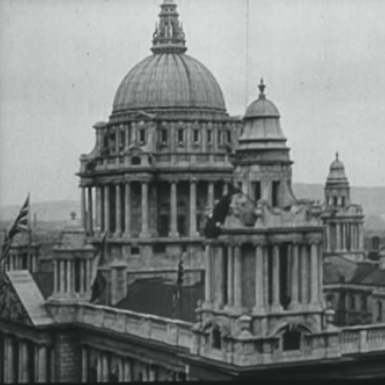 On 1 June 1921, the Belfast Corporation confirmed that Belfast City Hall would be used as a temporary venue for the first sittings of the Northern Ireland parliament. The City Hall hosted the preliminary meeting of the new parliament on 7 June, when Sir James Craig was appointed Prime Minister, and the formal state opening on 22 June. As Craig noted in the letter to the Belfast Corporation below, a number of sites were considered to take over from the City Hall as the permanent home of the new parliament, including Belfast Castle, Orangefield, and Belvoir Park. In the end, the Assembly’s College, the theological training centre of the Presbyterian Church in Ireland (now known as Union Theological College), was chosen as a temporary location. The Northern Ireland Parliament would sit in the Assembly’s College from August 1921 until 1932 when Parliament Buildings, located in the Stormont estate on the outskirts of Belfast, were completed.

The Belfast Parliament Opening Ceremony: The Use of City Hall

The preliminary opening of the “Northern” Parliament on the 7th June, and the formal State opening on the 21st June, will take place in the City Hall, Belfast. At a meeting of the Belfast Corporation Improvement Committee on Monday the following letter was read from Sir James Craig:

“My Dear Lord Mayor – I venture to request that you will kindly move the City Corporation to grant the use of the City Hall to the new Parliament for Northern Ireland on the occasion of its preliminary meeting on the 7th, and the formal opening on the 21st June next, and to grant to me the privilege of entertaining within its precincts to lunch on the 7th, and to lunch and a reception on the 21st, and further subsequently to place a room, or rooms, at the disposal of either House as may be found necessary, pending the securing of a temporary building suitable for a Parliament House, as to which I am now in negotiation. If granted this privilege will be highly appreciated by all concerned. Our new Parliament could not begin its career under better auspices than by sitting for the first time in your noble building.”