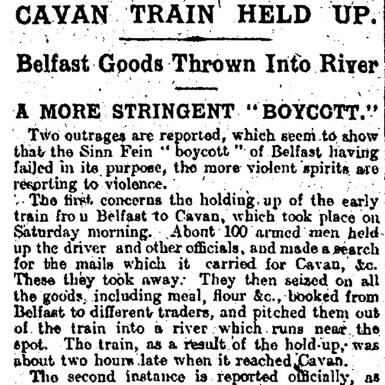 In August 1920 Dáil Éireann called for a boycott of goods from Belfast, in response to recent expulsions of Catholic workers from the city’s shipyards. Many of its members hoped that by boycotting goods in this way they might be able to reverse the partition of Ireland. By 1921 the boycott had extended to goods and business across the six counties. Trains travelling to and from the north were frequently held up and raided by the IRA. The Belfast News-Letter, reporting on recent incidents in Cavan and Armagh, criticised Sinn Féin for targeting businesses and farmers in this way.

Two more outrages are reported, which seem to show that the Sinn Fein “boycott” of Belfast having failed in its purpose, the more violent are resorting to violence.

The first concerns the holding up of the early train from Belfast to Cavan, which took place on Saturday morning. About 100 armed men held up the driver and other officials, and made a search for the mails which it carried for Cavan, &c. These they took away. They then seized on all goods, including meal, flour &c. booked from Belfast to different traders, and pitched them out of the train into a river which runs near the spot. The train, as a result of the hold up, was about two hours late when it reached Cavan.

The second instance is reported officially, as follows:

Towards midnight, some days ago, three men visited the house of a farmer in the Armagh district and threatened him with death for dealing with a certain bread company. The three men fired shots, and one of which struck the house near the front door. The same men then visited another house in the neighbourhood and threatened the occupant in a similar manner for dealing with the same bread company, and fired shots.

Three men have been arrested in connection with this outrage.