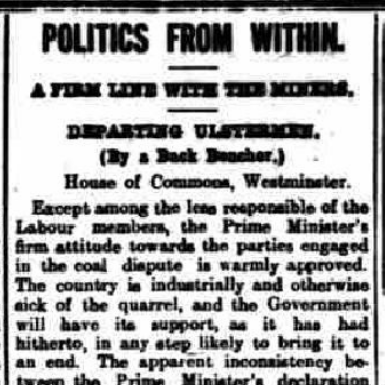 On 2 June 1921, in a column for the Londonderry Sentinel, an English backbench MP praised the efforts of a number of prominent Irish MPs as they stepped back from active participation in the House of Commons at Westminster. Many Unionist MPs resigned from their seats in the UK Parliament upon the establishment of the new devolved institutions, though often for different reasons. While Sir James Craig and Sir Denis Henry left London to become the first Prime Minister and Lord Chief Justice of Northern Ireland respectively, Sir Edward Carson moved down the corridor to the House of Lords, becoming a life peer on 1 June 1921. Some Unionists combined their roles in the imperial and devolved parliaments. The first Speaker of the Northern Ireland Parliament, Hugh O’Neill, retained his Westminster seat for Antrim until his retirement in 1952.

The House of Commons will have to pay a fairly heavy price for the setting up of an Irish Parliament and the complete Unionist success in the North in the loss of some of its familiar figures. Among these I include Sir Edward Carson, for though he does not go to Ireland but only to the other end of the corridor, he would not have sought the comparative leisure he has so well earned but for the fact that the position of Ulster is finally safeguarded. It may seem a strange thing to those who view Parliamentary affairs from outside that in spite of the hard things he has said and the militant part he has taken in the political life of the last thirty years, Sir Edward leaves not a single personal enemy in the House of Commons.

Mr. Denis Henry, the Irish Attorney-General, is to be the first Lord Chief Justice of Northern Ireland. His loss will be regretted, for he is a genial and able Minister, on the best of terms even with his political opponents. Another serious loss will be that of the Hon. Hugh O'Neill, who is marked out as Speaker of the Northern Parliament. He retains his membership at Westminster, but obviously can be little seen there in the future. He has shown great debating power and a notable breadth of mind. His dignified and courtly manners and his known fairness should make him a worthy occupant of the Chair in Belfast. Mr. Lynn and Mr. Moles are also retaining for the present their seats in the Imperial Parliament, but as they are likely to be members of the Northern Ministry they can be no more than occasional visitants here.