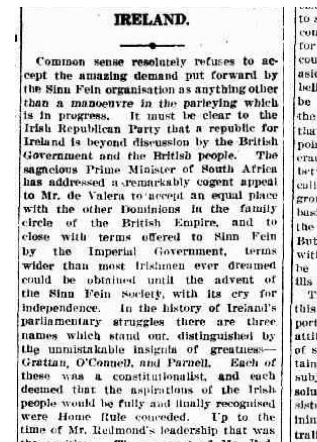 On 16 August 1921, an editorial in the Australian Daily Telegraph discussed recent events in Ireland, arguing that Irish nationalists must consider the views of Ulster and those of the whole Empire. In the following passage, the author argues that a solution to the Irish question should not undermine Australia’s position within the Empire, and advocates following the advice given recently by General Smuts, prime minister of the Union of South Africa.

The Right to Hope in Ireland

…The Imperial viewpoint vitally involves the Commonwealth. The occasion is opportune to state Australia’s position. The attitude of Australians is that any measure of self-government which the people Britain might cede to Ireland would not be subject to question in this country. But a solution inimical to the Empire would be resisted by Australians, because whatever is inimical to the Empire is inimical to Australia. If Ireland has rights it must be that that Empire also has rights; and the chief right of the Empire is the right to exist. We stand with the Empire, if only for the selfish reason that, should the Empire fall, Australia would inescapably fall with it. Australia made its union with the Empire sacramental with the blood of 60,000 of its young men. Australia did that so that the Empire should not be overthrown. Australia stands with the Empire because it means the safety and security of Australia, with all its hopes and visions. There is no other attitude possible to the patriotic Australian. Mr. Lloyd George appeals to geography and history as reasons against separation. There is a greater reason. There is too much Irish blood in the veins of the Empire to make its cold dissection tolerable. The errors of British statesmanship in the treatment of Irish demands are glaring and inexcusable; but, looking backwards is the least profitable occupation in a case like this. The time has surely arrived, in the frank words of the King at the opening of the Ulster Parliament, to “forgive and forget.” It is inconceivable that Ireland should refuse to take the hand which is thus held out, inviting her to a freedom as full as that enjoyed by Australia under the Imperial Crown. General Smuts, than whom no man can speak with greater authority upon this question, says that “for Irishmen to say to the world that they would not be satisfied with Dominion status would be to alienate that sympathy which has been the mainstay of the Irish cause.” A favourable indication is that, although the negotiations are at a critical stage, they have not broken off. This gives us the right to hope that an acceptable solution will be arrived at, which will crown with lasting peace a struggle which is riving the Empire to it.