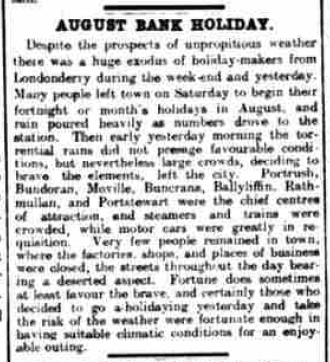 Despite the prospects of unpropitious weather there was a huge exodus of holiday-makers from Londonderry during the week-end and yesterday. Many people left town on Saturday to begin their fortnight or month’s holidays in August, and rain poured heavily as numbers drove to the station. Then early yesterday morning the torrential rains did not presage favourable conditions, but nevertheless large crowds, deciding to brave the elements, left the city. Portrush, Bundoran, Moville, Buncrana, Ballyliffin, Rathmullan, and Portstewart were the chief centres of attraction, and steamers and trains were crowded, while motor cars were greatly in requisition. Very few people remained in town, where the factories, shops, and places of business were closed, the streets throughout the day bearing a deserted aspect. Fortune does sometimes favour the brave, and certainly those who decided to go a-holidaying yesterday and take the risk of the weather were fortunate enough in having suitable climatic conditions for an enjoyable outing.

The August Bank holiday in Belfast is not observed beyond the closing of the banks, stock exchange, and public offices, and these activities were at a standstill yesterday. On the railways there was a great amount of traffic of those either returning from or going on holiday.