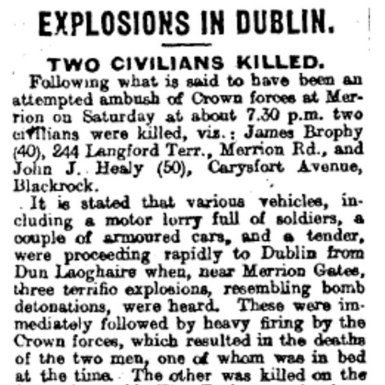 The War of Independence saw Irish and British military forces engage in a series of violent attacks and reprisals against each other. Both sides condemned the violence, while arguing that their own actions were necessary and justified. In February 1921 The Fermanagh Herald carried multiple reports of recent IRA attacks on Crown forces across the island of Ireland. The selection below shows that, while most attacks targeted military bases and personnel, civilians were also caught in the cross-fire.

Following what is said to have been an attempted ambush of Crown forces at Merrion on Saturday at about 7:30 pm two civilians were killed, vis: James Brophy (40), 244 Langofrd Terr., Merrion Rd., and John H. Healy (50), Carysfort Avenue, Blackrock.

It is stated that various vehicles, including a motor lorry full of soldiers, a couple of armoured cars, and a tender, were proceeding rapidly to Dublin from Dun Laoghaire when, near Marrion Gates, three terrific explosions, resembling bomb detonations were heard. These were immediately followed by heavy firing by the way of Crown forces, which resulted in the deaths of the two men, one of whom was in bed at the time. The other was killed on the footpath outside Elm Park grounds, from which he had come.

On as stretch of a half a mile a great many houses and walls are marked by bullets and bomb splinters, and many people had marvellous escapes from death.

The occurrence occupied only two or three minutes, it is reported. According to an official statement, the military sustained no casualties.

An attack was made at 9:30 on Friday night on the police barracks at Elphin (Co. Roscommon). Explosives it is said, were used and the gable end of the building was blow in. The attack lasted through the night, and was not driven off until 5:30 a.m. on Saturday. The police escaped serious injury. Telegraph and telephone wires in the neighbourhood were cut.

The Castle official report of the burning of the aeroplane near Kilfinane, Co. Limerick, estate that the machine was forced to land at Ballinamina at 4pm on Thursday. While the pilot, named Martin, went for assistance, armed men attacked and burned the machine, and removed the observer, Mackey, to an unknown destination.

According to one account, the machine was brought down by rifle fire.

East Limerick district has been invested by large bodies of Crown forces, and extensive searches are being carried out. It is stated that aeroplanes have dropped notices warning the people of the consequences if the officer is not returned.

The missing airman has since turned up at Buttevant, Co. Cork.