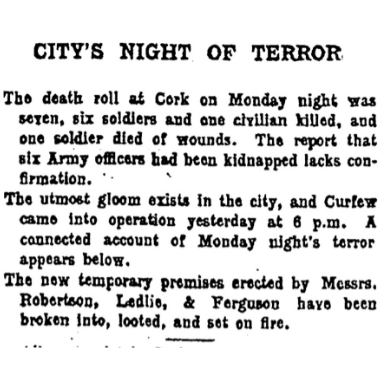 The city and county of Cork was an area of particularly severe fighting and reprisals during the War of Independence – in December 1920 numerous public buildings in the city were set on fire by Black and Tan forces. Three months later the Belfast News-Letter described a ‘night of terror’ in the city, when several soldiers and a civilian were killed in further attacks. The civilian, Charles Daly, was attacked by Black and Tan forces due to his alleged involvement with the IRA. The violence caused the military governor of Cork to introduce a 6pm curfew across the city in an attempt to restore order.

All was quiet in Cork yesterday, and the new Curfew hour – which came into force at 6 pm – gave the city the appearance of being deserted at a time when, otherwise, it would be very animated. A state of tension still prevails, and there is a gloomy feeling on all sides.

The total death roll, as a result of the murders on Monday night, is seven – five soldiers killed, one died of wounds, and a civilian killed. Six soldiers are definitely known to have been wounded.

The murder of the civilian was a dreadful affair. He was a clerk in the parcels office of the G.S.W.R. terminus, Glanmire, named Charles Daly. He was on night duty, and shortly before midnight three armed and disguised men entered the premises. One of them held up a member of the staff on the platform, and another, entering the parcels office, forced Daly to accompany him. He was marched to the mouth of the tunnel, and a few moments later shots rang out, and the three disguised men made off.

The night staff heard the shots, but were afraid to investigate until 5 o’clock in the morning, when they found Daly’s body lying in a pool of blood near the entrance in the tunnel.

Yesterday during the forenoon, bodies of troops, in extended order, proceeded through the streets of the city, calling upon civilians to take their hands out of their pockets. Numerous searches of pedestrians were made.

There was considerable military activity in the evening. A few shots were fired in the streets, and a man named Casey was wounded. He was sitting in his house when a bullet entered through the window, inflicting serious wounds in the chest.

There were persistent rumours that six military officers had been kidnapped on Monday, but military headquarters in Dublin had no information on the subject.