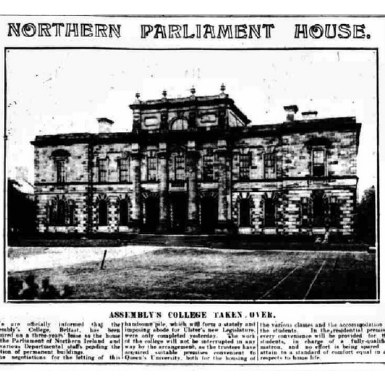 The Assembly's College in Belfast, now the Union Theological College.

On 28 July 1921, the Belfast Telegraph announced that the Assembly’s College (now the Union Theological College), located on Botanic Avenue, Belfast, would temporarily host the Parliament of Northern Ireland. It eventually hosted the parliament for eleven years from 1921 to 1932, when the legislature moved to the new Parliament Buildings at Stormont.

We are officially informed that the Assembly’s College, Belfast, has been acquired on a three-years’ lease as the home of the Parliament of Northern Ireland and its various Departmental staffs pending the erection of permanent buildings.

The negotiations for the letting of this handsome pile, which will form a stately and imposing abode for Ulster’s new Legislature, were only completed yesterday. The work of the college will not be interrupted in any way by the arrangement, as the trustees have acquired suitable premises convenient to Queen’s University, both for the housing of the various classes and the accommodation of the students.

In the residential premises every convenience will be provided for the students, in charge of a fully-qualified matron, and no effort is being spared to attain to a standard of comfort equal in all respect to home life.

The Assembly's College in Belfast, now the Union Theological College.