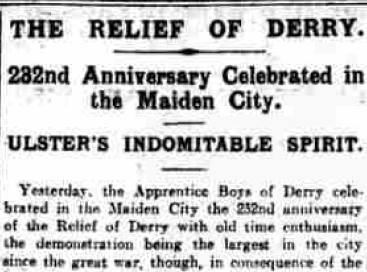 On 28 July 1689, four ships arrived at the mouth of the River Foyle to bring food to the starving citizens of Derry. The first organised celebrations of the Relief of Derry took place at a thanksgiving service on 8 August and subsequent celebrations followed this precedent. The 232nd anniversary included an address from the Reverend Canon MacQuaide and a march through the city streets. Yesterday, the Apprentice Boys of Derry celebrated in the Maiden City the 232nd anniversary of the Relief of Derry with old time enthusiasm, the demonstration being the largest in the city since the great war, though, in consequence of the lack of railway facilities, it was not of the dimensions which the demonstrations on this great anniversary reached in pre-war days. The brethren assembled on the city walls after eleven o’clock, and there was a splendid turnout of all the parent clubs, while branches and representatives from Belfast, Antrim, Newtownards, Killymallagh, Donemana, Ardstraw, Glasgow, and Liverpool journeyed to the Maiden City to participate. All the Loyalist streets were a blaze of colour, and the display of arches was greater and on a more magnificent scale than ever before…

After the conclusion of the service the brethren re-formed and marched through the principal streets of the city, and afterwards made a circuit of the walls.

An interesting little ceremony took place in the Loyalist quarter of Fountain Street, where a magnificent picture of King William III. crossing the Boyne had been painted on the gable of a house in Clarence Place. Mr Wm. McGahey, J.P. unveiling the painting, said that in the present critical times Ulster need have no fear. They had sent to represent them in the Northern Parliament members who could be trusted to do nothing that would endanger the six counties, but would safeguard their rights and liberties.

The bands present then played the National Anthem, and the celebrations concluded.