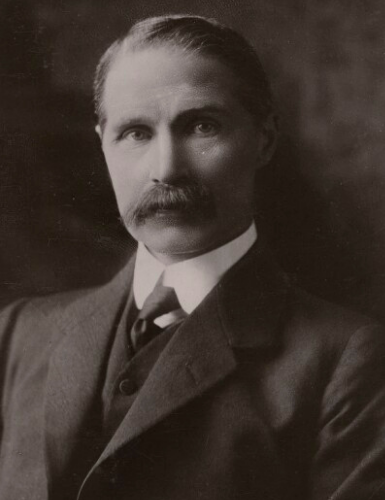 The resignation of Andrew Bonar Law, leader of the Conservative Party and Chancellor of the Exchequer in Lloyd George’s coalition government, was a heavy blow for the Prime Minister. For much of the preceding twenty years, Bonar Law had campaigned fiercely against Irish Home Rule. Indeed, when Winston Churchill spoke in Belfast in 1912 in favour of Home Rule, Bonar Law countered this with his own speech in the city, pledging to oppose Home Rule by any means necessary. If Ulster Unionists regretted the loss of the man that had been a close political ally, his resignation caused even more problems for Lloyd George, as his Liberal government was dependent on Conservative support. The Belfast Telegraph speculated that Lloyd George might even resign himself in light of Bonar Law’s decision.

Mr Bonar Law’s universally regretted illness, which was the cause of his resignation from political life, was conveyed by a touching letter read by the Prime Minister in the House of Commons on Thursday afternoon, began after his strenuous visit to Scotland at the end of last week, but his final decision to resign was only reached on Thursday after a medical conference. …

The resignation was responsible for a flood of rumours in the Parliamentary Lobbies and it was recognised on all sides how sever a blow it is for the Prime Minister and the Coalition. The immediate future is full of interesting possibilities and members were dismissing especially whether the end of the Coalition will be hastened or delayed. Opinion was sharply divided. Those who appreciate with what skill Mr. Bonar Law has directed the Unionist party’s activities and kept his supporters united, feel that the restive and critical element may now meet with greater success. On the other hand, his retirement is a set-back to those who felt the time had come for Unionists to resume their independence and endeavour to form a Government on pre-war lines.

Mr Lloyd George was greatly upset by the development, and disinclined to discuss it. Many members were asking in the Lobby whether he also will not resign if his tasks are made more difficult than they ought to be by constant nagging and criticism. His health is not of the best, and he too is feeling the strain of his work.